A research lab that started out with hopes of creating a cyborg with self-developing skin has created the newest line in womenswear — skintight dresses made from fermented wine. 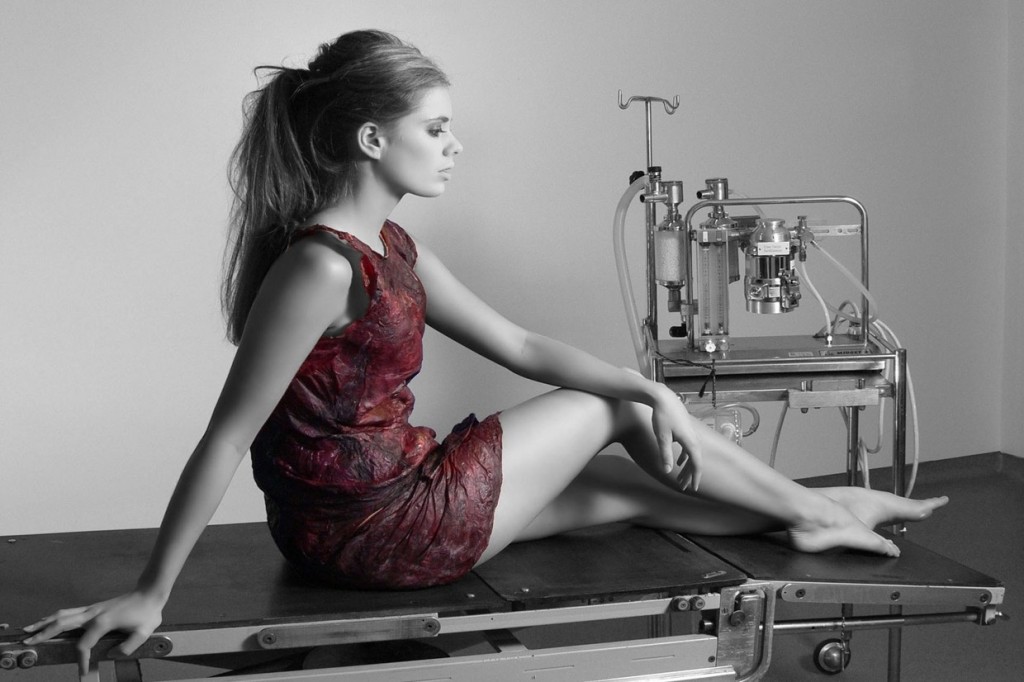 that seeks to “help children develop a foundational understanding of the world.” The immersive anatomy app for kids features some great artwork work from illustrator and designer Kelli Andersen who created 200+ illustrations of bones, veins, muscles and other components that comprise the interactive environment as well as the stop motion video above. 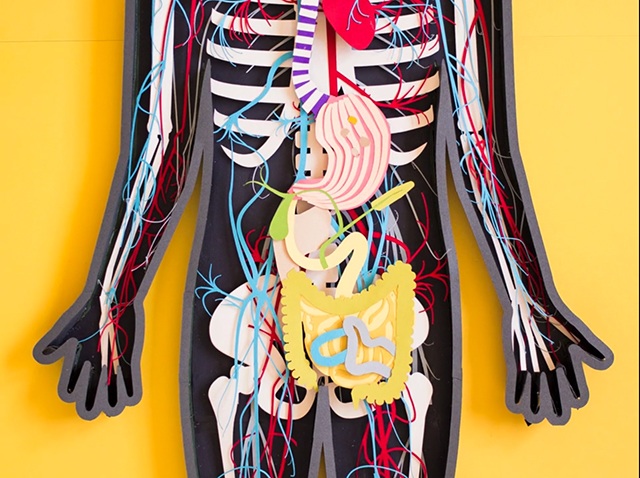 Category : Events, Exhibitions
“Bone & Blood: Structural Bodies in Motion,” opening on Saturday, Sept. 28 (6 – 10 p.m.) and Sunday, Sept. 29 (noon – 4 p.m.).
This groundbreaking art event at Chicago’s Squid3 Gallery (1907 N. Mendell, Ste. 4-H, 60642) will present 22 artists’ interpretations of seemingly opposite, visceral textures and of their exploration how blood, bone, and our physical bodies and thoughts are intrinsically connected and always in motion.
Unique to opening night are live performances on the aerial hoop, trapeze, and silks by circus artists and a demonstration of anatomy in motion by climbers on a bouldering wall. Got some nice images that explore the body, medicine or health?

If you’re a research scientist, a clinical photographer or an illustrator, contribute to Wellcome Images now to be entered into the Wellcome Image Awards 2014.

Deadline to submit for the awards is 30 September 2013.

The impressive permanent co has been largely closed to the public since the 1970s but it’s filled with fascinating and macabre specimens such as a conjoined twin skeleton and the rotting hand of a leper.

The collection usually only opens to the public alongside special events and seminars; but for the next two weeks, it’s open to the public, giving you the opportunity to see such treasures as a collapsed windpipe simply labelled ‘strangulation’, with the rest of the story left to visitors’ imagination. The Queen’s Gallery, Palace of Holyroodhouse

Long recognised as one of the great artists of the Renaissance, Leonardo da Vinci was also a pioneer in the understanding of human anatomy. Had his ground-breaking work been published, it would have transformed European knowledge of the subject.

This exhibition displays thirty sheets of Leonardo da Vinci’s anatomical studies, which date from the winter of 1510-11 when he carried out some 20 autopsies at the University of Pavia in collaboration with the professor of anatomy, Marcantonio della Torre, and uses the latest medical technology including CT and MRI scans, computer simulations and 3D film of the body to explore the modern relevance of his anatomical research. This juxtaposition shows how far-sighted Leonardo’s work was, and how close he came to 21st-century medical thinking.

More info about the exhibition here