Tissue cultures, genetic modification, bacterial colonies. Over the last decade, more and more artists have been giving up

the studio in favor of the laboratory.

In the spring of 2008, curator Paola Antonelli at the Museum of Modern Art in New York was forced to kill a work of art. A thumb-size “jacket” cultivated from mouse tissue that lived inside a sterile glass ball, Victimless Leather was not your typical museum piece. The cells were very much alive—and they were multiplying. So rapidly, in fact, that five weeks into the exhibition, they were threatening to clog the incubation system that kept them alive. Antonelli would have to cut off the nutrient supply. But she couldn’t bring herself to do it. “There was no way I was going to switch it off,” she recalls. “I can’t even kill a mosquito.” 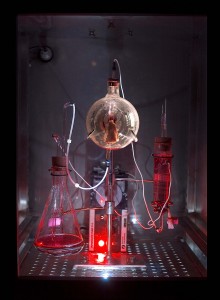