MEDinART in Vesalius event_Embassy of Belgium in Kazakstan: The final program.

Delighted to announce that MEDinART will be presented in the Vesalius event that will take place in Astana, Kazakstan!

Organizers: Embassy of Belgium in Astana, Kazakstan in cooperation with the Medical University of Astana.

More info about the event, HERE 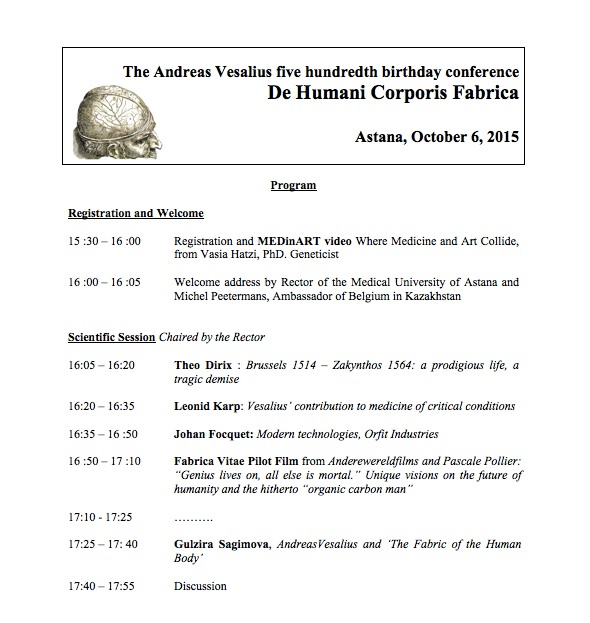 Summary: Orfit Industries owes a lot to Andreas Vesalius. Our core businesses of physical rehabilitation and radiation oncology patient positioning systems could not have developed into what they are today without in-depth knowledge of the human anatomy. Vesalius’ care for detail in describing the human body enables us today to provide medical professionals with (sub)millimeter-precise positioning solutions for radiotherapy. Occupational and physical therapists use our thermoplastic splinting materials to achieve the most effective treatments based on their thorough insight in the human muscular system. Innovation is as much part of Orfit’s DNA as it was of Andreas Vesalius’ DNA. Innovative methods and technologies help us in setting new standards in medical care, for which Belgium is so well known.

CV: Johan Focquet is an experienced European sales and marketing executive. He joined Orfit Industries NV in 2011 as Export Sales Manager, responsible for managing a network of distributors in Europe, Central Asia and North Africa. Until then, he held various positions in the fields of sales and marketing at the European headquarters of Pioneer Corp., a Japanese multinational in the electronics market. Being active in an international environment, enables him to combine his professional objectives with his personal aspirations of meeting new people and learning new cultures.

Theo Dirix: In search of Andreas Vesalius – Portraits and other Hoaxes

Summary: Andreas Vesalius did not travel to Jerusalem under pressure of the inquisition, neither as penance nor escape: he went there as a devout pilgrim with the support of his employer. Upon his return, he did not die on a deserted beach in the Ionian Sea, the only victim of a shipwreck. Weakened by his stay in the Holy Land and by an unfortunate return journey, he died in 1564 in Zakynthos, Greece, and was buried there in the Santa Maria delle Grazie Church, now destroyed by earthquakes. What began as a quest for his lost grave, has turned into a crusade against persistent inaccuracies and stubborn assumptions in Vesalius’s biography.

CV: Theo Dirix has held the office of Consul in Embassies of Belgium in (successively) Tanzania, Saudi Arabia, Jordan, Canada, the United Arab Emirates and, since 2011, in Greece. Before 1989, he worked for the Flemish Radio 3 and commented on (mainly Moroccan) literature. He has never stopped writing travel stories, mainly about graves. In 2014, he publishes: “In search of Andreas Vesalius – The quest for the Lost Grave”.

Summary: The history of tracheostomy and intubation of a trachea is quite unique, as throughout 4 millennia (approximately from 2000 BC to the XX century) these methods fell into oblivion, and then again were rediscovered. Initially they were only revival methods, and only then began to be applied as planned manipulations when carrying out the artificial ventilation of lungs. Only in Renaissance the tracheostomy appeared as important medical procedure again. If to address to written sources of this era, actually the tracheostomy for carrying out IVL was for the first time described in 1543 by 28-year-old Andreas Vesalius in his monumental 7-volume work “About a Structure of a Human Body” which Russian translation occupies about 2000 pages. In transformation of a tracheostomy from only resuscitation procedure in planned manipulation Andreas Vesalius, undoubtedly, is if not the pioneer, then one of the most main applicants for this discovery.

CV: Leonid Karp graduated from Tselinograd State Medical Institute in 1971, and obtained his PhD degree at the Institute of Social Hygiene and Health Care Organization in Moscow. His thesis topic concerned morbidity in rural areas of Northern Kazakhstan. Since 1974, he has been a professor – and, since 2005, the chair – at the Department of Public Health in Astana Medical University, where he teaches health care organization and history of medicine. His main research interests are human development, suicide, sociological aspects of euthanasia and motor-vehicle traumatism. He has participated in numerous scientific congresses and seminars and has over 150 scientific publications. In 2014 Professor Karp was awarded The Best Professor award by the Ministry of Education and Science of Republic of Kazakhstan.

Gulzira Sagimova: Andreas Vesalius and “The Fabric of the Human Body”

Summary: Andreas Vesalius (1514 – 1564), Renaissance Belgian anatomist, physician and author of one of the most influential books on human anatomy, who revolutionized the study of biology and the practice of medicine by his careful description of the anatomy of the human body. Basing his observations on dissections that he made himself, he wrote and illustrated the first comprehensive textbook of anatomy. His major work “De humani corporis fabrica libri septem” (“The Seven Books on the Structure of the Human Body”) commonly known as the Fabrica, was printed in 1543. In this epochal work, Vesalius deployed all his scientific, humanistic and aesthetic gifts. The Fabrica was a more extensive and accurate description of the human body than any put forward by his predecessors; it gave anatomy a new language and, in the elegance of its printing and organization, a perfection hitherto unknown. Thanks to his invaluable contribution, Vesalius is often referred to as the founder of modern human anatomy.

CV: Gulzira Sagimova has been working as a senior teacher of department of Human Anatomy and Operative Surgery in Medical University Astana since 1991, when she graduated from Tselinograd State Medical Institute. She researches development of lymphoid tissue of gastrointestinal tract and has over 50 scientific publications.