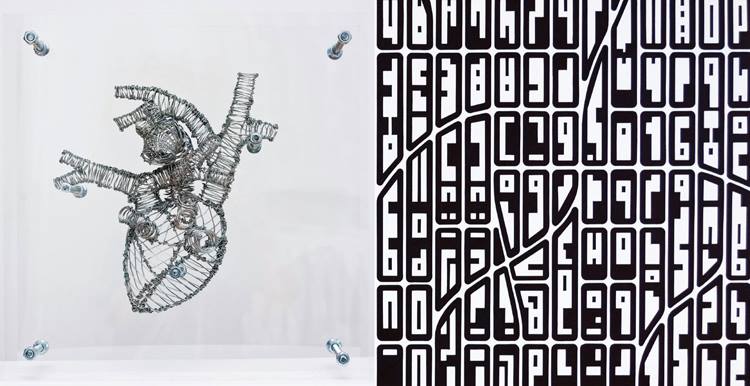 The exhibition ANATOMICAL ARCHITECTURES is the result of a personal inquiry on the relationship between the human body and architecture. Some twenty works produced by the artist between 2008 and 2013 have been selected to make up a set shown in a scenography halfway between the aesthetics of a museum and that of a research lab. Emulating an architectural approach, this body of work was developed along two lines of analysis. First, the artist sketches some components of the human body on wood panels with the help of drawings, painting and collages; then he materializes the subject in the guise of steel wire sculptures.

These sculptures, defined by the artist as “spatial drawings”, take the form of various parts of the human anatomy. Heart, brain, lungs and other body parts appear to be floating within a rigid structure made up of see-through partitions and stainless steel rods. These works offer a new representation of images in space by exploring emptiness and the dematerialization of volume. The idea of a presence of the human body that is at once physical and metaphysical finds expression in it.

Furthermore, collage drawings on wood reinterpret the process of designing the sculptures. They serve as a fictional manual for three-dimensional works. These images peel away and pull apart the structure of the body and its organs by highlighting their technical and architectural features so as to better understand them.

Carefully handmade with great dexterity, these sculptures impress as much by their precious and complex character as by their curious and intriguing nature, reminiscent of objects in the curiosity cabinets of old. Federico Carbajal allows the viewer to take a deeper look at the human body, its anatomy, and the appropriation of the symbols pertaining to it.

Born in Mexico in 1978, Federico Carbajal earned a B.Arch. at the Universidad Iberoamericana León (1998 -2003). From 2006 to 2008, he pursued his studies and completed a Master’s degree in architecture at Université de Montréal. In 2010, under the mentorship of artist Helga Schleeh, he followed the Independent Studies Program at the Visual Arts Centre of Montreal. His first experiment with sculpture took place in 2000 in New York, where he worked as an assistant to sculptor Holton Rower, grandson of the famous sculptor Alexander Calder, who created the ‘mobile’. Federico Carbajal has been working with sculpture for 9 years now, alongside his trade as an architect, which he plies since 2002. He has been a member of the Sculptors Society of Canada since 2010 and his works have been shown in both Mexico and Canada. Federico Carbajal currently lives and works in Montreal.

SYLVAIN LESSARD
CITIES – PICTOGRAMS
The series CITIES – PICTOGRAMS is part of a reflection on the theme of urbanism that the artist has been exploring for several years. In this new body of works on paper, Sylvain Lessard offers a series of ink drawings inspired by the concept of the pictogram.

By definition, a pictogram is a schematic graphic representation, a stylized drawing functioning as a sign that is generally used for orientation in space. In cities, the urban lay-out builds up symbols that reveal pictograms like hidden codes. Architectural forms are significant for civilization and become pictograms that orient the general population.

In Sylvain Lessard’s inner cities, signs fall into place to form a complex urban itinerary. The artist loses himself in the labyrinthine decoding of these very organized morphostructures. Following a method that leaves no room for error, it is freehand that he builds his works in a range that is cut down to black and white. The viewer is invited to behold at once the painstaking technique and the complexity of the composition.

An architect by trade, Sylvain Lessard also has a sustained visual arts practice since the beginning of the century. His work has mostly been shown in Quebec through the network of the maisons de la Culture and of self-run artist centres. Having first explored the links between organic elements of the human body and architecture, he now deals mostly with issues of territory and urbanism. CITIES – PICTOGRAMS is the second solo exhibition he is having at Galerie Dominique Bouffard.