This pharmakon, this “medicine,” this philter, which acts as both remedy and poison, already introduces itself into the body of the discourse with all its ambivalence. This charm, this spellbinding virtue, this power of fascination, can be – alternately or simultaneously – beneficent or maleficent.

The title, Pharmakon, simply and clearly encapsulates the context of her creativity with respect to the development of the idea, the medium and the base material, the aesthetic completion of her work. And this is because with each component the artist evokes and alludes to Medicine, Treatment, and Healing of body or soul.

The three sections, “Religion-Metaphysics”, “Nature”, and “Science –Chemistry”, reflect the artist’s scientific and historical research on the treatment of human disease, from primitive societies to the present day, from metaphysics and religion, the use of natural resources and herbs, and later the development of science and chemistry in the effort to heal the human soul and body. According to the artist the three sections of her work on display illustrate “the history of therapeutics as a palimpsest of metaphysics, nature and science.”

The body of her work has affinities with Minimal Art, Op Art, and of course Conceptual Art. Her art has a direct, sincere relationship with the minimal, with the common, as well as with geometric forms that are clearly defined with respect to space and viewers’ perception. She achieves the ultimate rationality of form through a systematic, laborious, and time consuming process. In her hands the common becomes powerful, invested with meaning. Peggy’s works throw into relief Adorno’s thought that art acquires meaning, significance, in the absence of function. 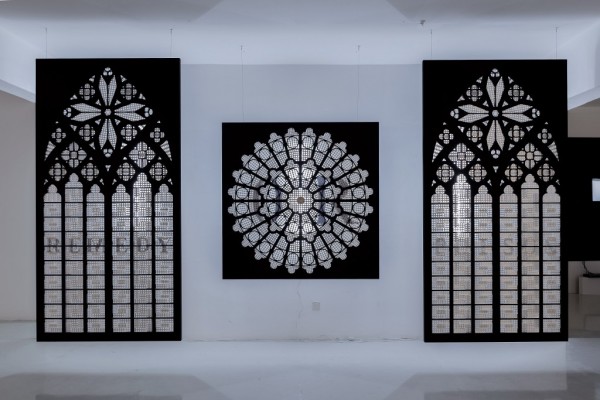 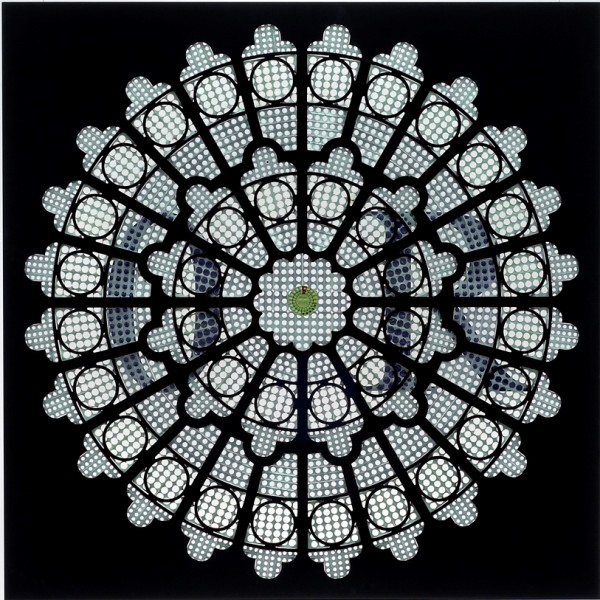 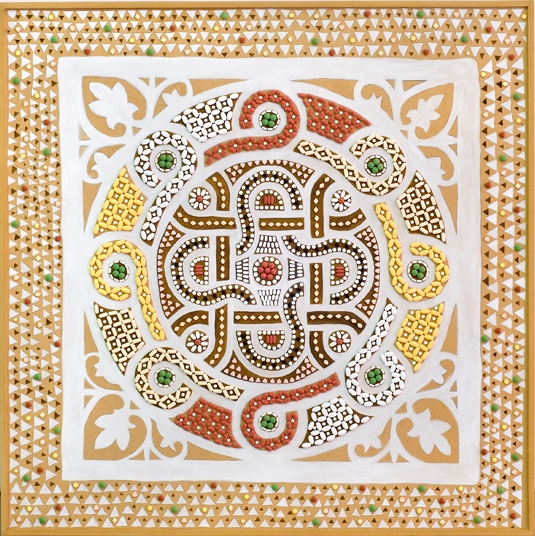 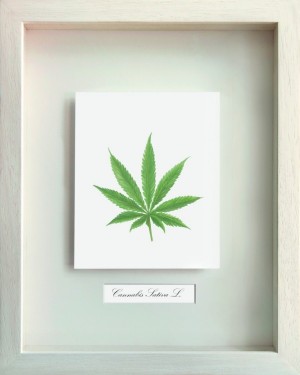 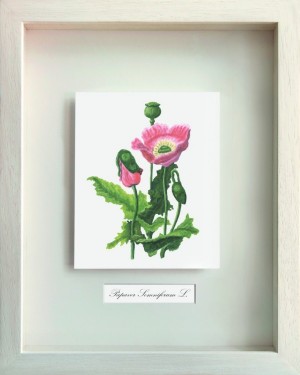 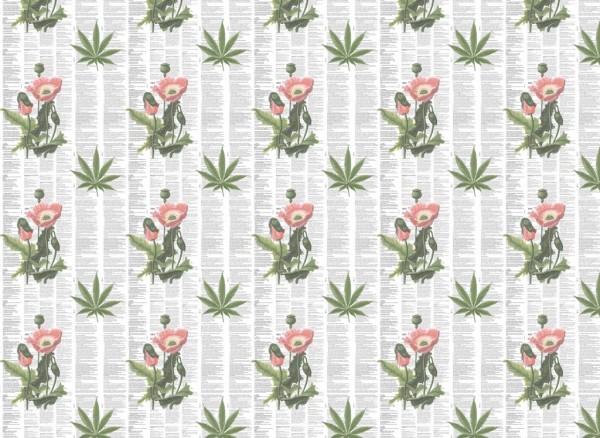 NATURE IS INNOCENT – 2013 – Wallpaper – Dimensions variable. Background of the wallpaper: medicines’ directions of use (representing moderation) and upon them: opium flower and marihuana leaf. A comment on the fact that the “good” and the “evil” exist in nature as well as in science; it is in our free will to choose the qualities and quantities which do not harm us. ©Peggy Kliafa 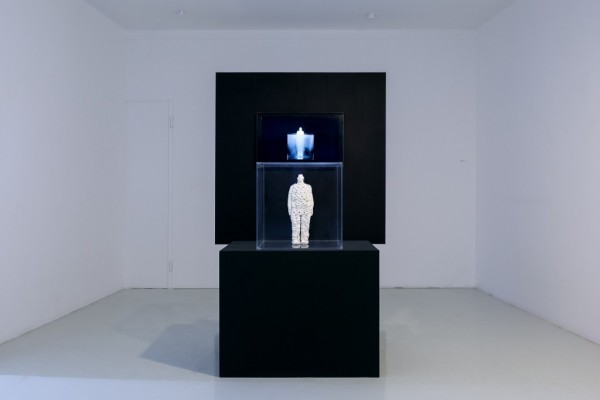 Installation: Effervescent Sculpture and Video: Sculpture: Man (by effervescent tablets) – 2011 – Effervescent tablets, water, plexi-glass base – 50 Χ 17 Χ 10 cm / Video: Dissolution – 2011 – in 2 versions lasting 2,45’ and 3,05’ each. It is a video which shows the dissolution of the effervescent sculpture (“Man”) in a plexi glass cube filled with water, its fall and its disappearance. A video about the ephemeral and the self-destructive of the human existence. ©Peggy Kliafa 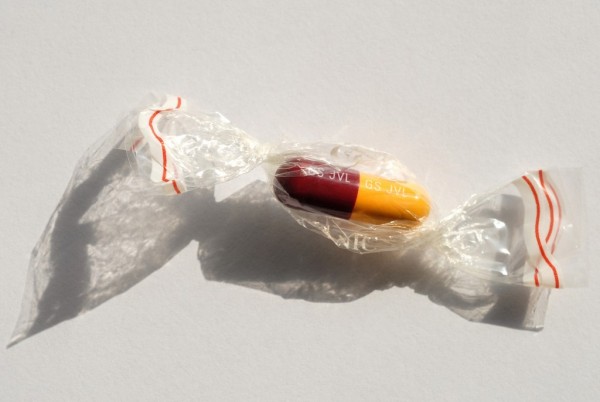 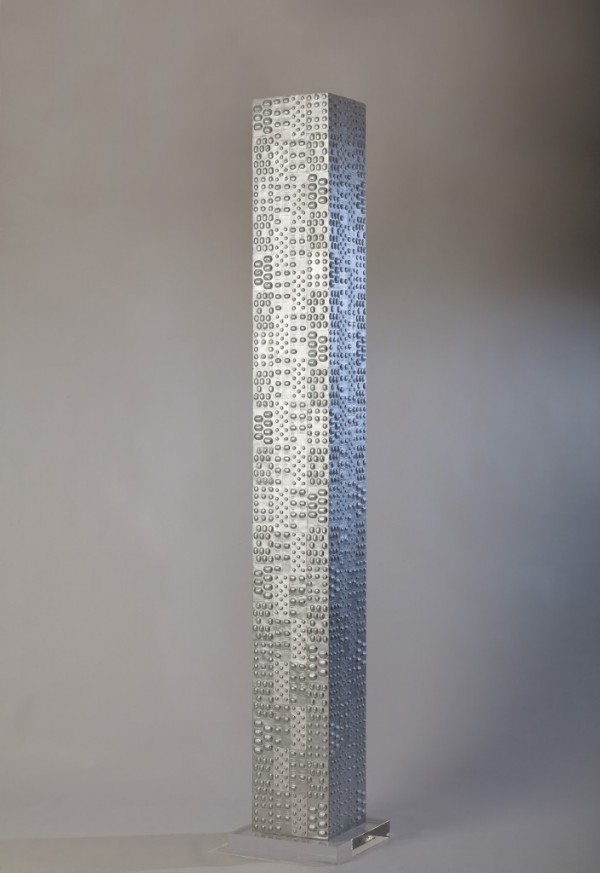 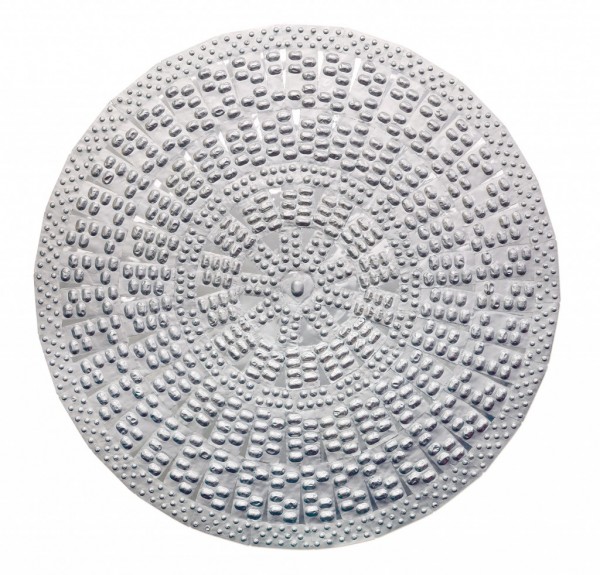 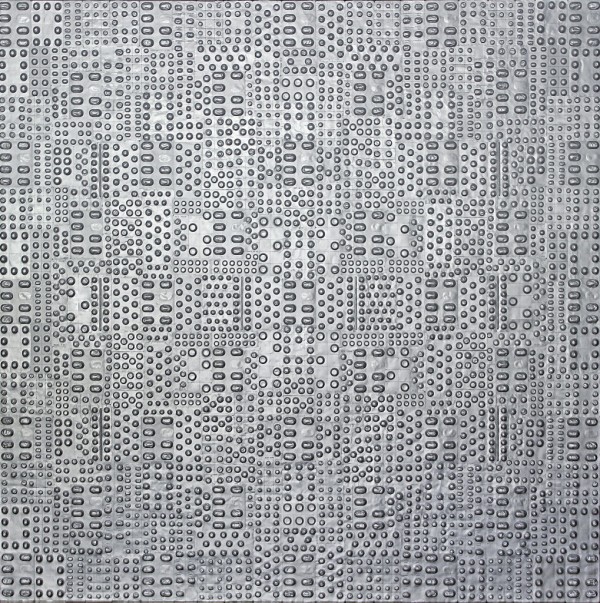 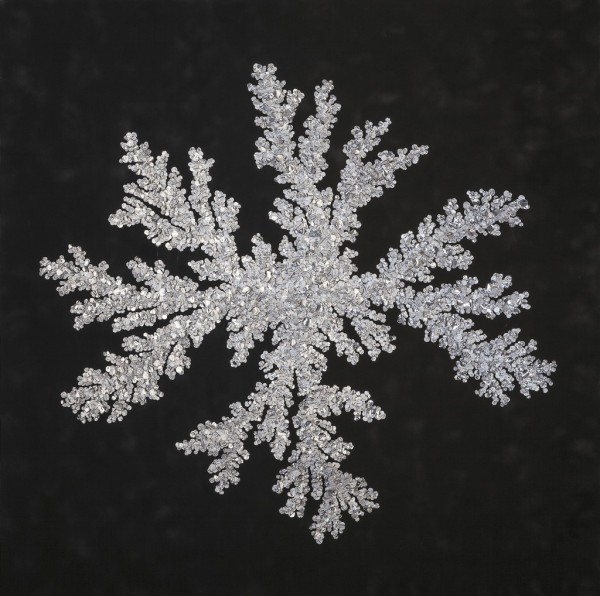 BACTERIA III OR STAR – 2013 – Aluminum parts from pills blisters on canvas, silicone, acrylics – 140 X 140 cm – piece on the wall. From the Bacteria Series: enlarged image of bacteria colony represented by the aluminum parts of the back side of the pills’ blisters. The problem and its solution, illness and therapy, death and life in one artwork. ©Peggy Kliafa

BIO
Peggy Kliafa (b.1967) is a multimedia contemporary visual artist, living and working in Athens, Greece. She graduated from the Athens University of Economics and Business (1990), where she studied Business Administration (Major in Marketing) and from the Athens School of Fine Arts - Major in Painting and main choice Sculpture- (2012). She participated in several Group Exhibitions and Art Fairs in Greece and abroad (e.g. in the Athens School of Fine Arts and Athens University, Athens Concert Hall, Rhodes Museum of Modern-Greek Art, Fondazione Giorgio Cini -Venice, Art Athina, Beirut Art Fair, Removement, Athens, 2017 supported by NEON organization, Ionian Parliament of Corfu, EMST-National Museum of Contemporary art – Athens, 6th Thessaloniki Biennale of Contemporary Art – “Imagined Homes”, Averoff Museum of Neohellenic Art, Metsovo, Makrideio Theatre, Paphos, Cyprus). She also had a work presentation in Onassis Cultural Center, two Solo Exhibitions – Pharmakon in Kappatos Gallery, Athens (2013) and Placebo in Lola Nikolaou Gallery, Thessaloniki as well as a 3-person show in the Averoff Museum of Neohellenic Art, Metsovo (2017). Her works have been acquired by public collections in Greece and several private collections in Greece and abroad.