“With gene mapping, gender reassignment, prosthetic limbs and neural implants, what a body is and how a body operates becomes problematic. We generate Fractal Flesh and Phantom Flesh, extended operational systems and virtual task environments. Meat and metal mesh into unexpected and alternate anatomical architectures that perform remotely beyond the boundaries of the skin and beyond the local space it inhabits. The monstrous is no longer the alien other. We inhabit an age of Circulating Flesh. Organs are extracted from one body and inserted into other bodies. Limbs that are amputated from a dead body can be reattached and reanimated on a living body. A face from a donor stitched to the skull of the recipient becomes a Third Face. A skin cell from an impotent male can be recoded into a sperm cell. And more interestingly a skin cell from a female body might be recoded into a sperm cell. Turbine hearts circulate blood without pulsing. In the near future you might rest you head on your loved one’s chest. They are warm to the touch, they are breathing, they are certainly alive. But they will have no heartbeat. A cadaver can be preserved forever through plastination whilst simultaneously a comatose body can be sustained indefinitely on a life-support system. Dead bodies need not decompose, near-dead bodies need not die. Most people will no longer die biological deaths. They will die when their life-support systems are switched off. The dead, the near-dead, the not-yet-born and the partially living exist simultaneously. And cryongenically preserved bodies await reanimation at some imagined future. We live in an age of the Cadaver, the Comatose and the Chimera. Liminal spaces proliferate. Engineering organs, stem-cell growing them or by bio-printing will result in an abundence of organs. An excess of organs. Of organs awaiting bodies. Of Organs Without Bodies.” 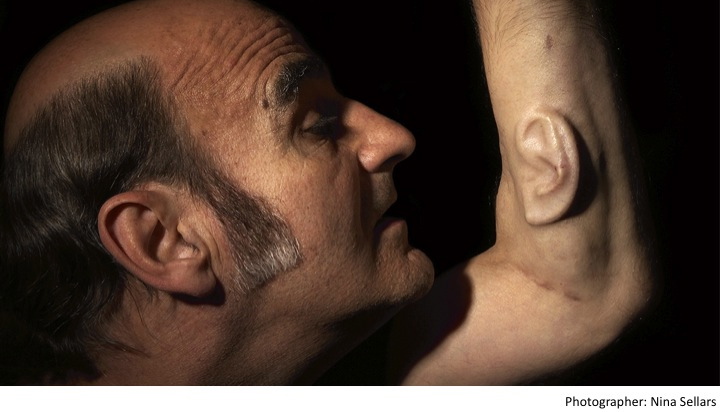 EAR ON ARM. "The EAR ON ARM suggests an alternate anatomical architecture - the engineering of a new organ for the body: an available, accessible and mobile organ for other bodies in other places, enabling people to locate and listen in to another body elsewhere. The EAR ON ARM has required 2 surgeries thus far. An extra ear is presently being constructed on my forearm: A left ear on a left arm. An ear that not only hears but also transmits. A facial feature has been replicated, relocated and will now be rewired for alternate capabilities [...]" http://stelarc.org/?catID=20242 ©Stelarc 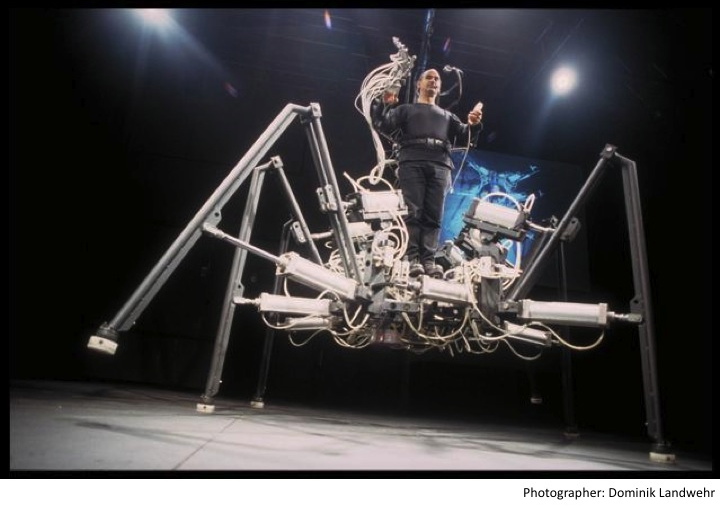 EXOSKELETON. "A six-legged, pneumatically powered walking machine has been constructed for the body. The locomotor, with either ripple or tripod gait, moves fowards, backwards, sideways and turns on the spot. It can also squat and lift by splaying or contracting its legs. The body is positioned on a turn-table, enabling it to rotate about its axis. It has an exoskeleton on its upper body and arms. The left arm is an extended arm with pneumatic manipulator having 11 degrees-of- freedom. It is human-like in form but with additional functions. The fingers open and close , becoming multiple grippers. There is individual flexion of the fingers, with thumb and wrist rotation. The body actuates the walking machine by moving its arms. Different gestures make different motions- a translation of limb to leg motions. The body's arms guide the choreography of the locomotor's movements and thus compose the cacophony of pneumatic and mechanical and sensor modulated sounds [...]" http://stelarc.org/?catID=20227 ©Stelarc 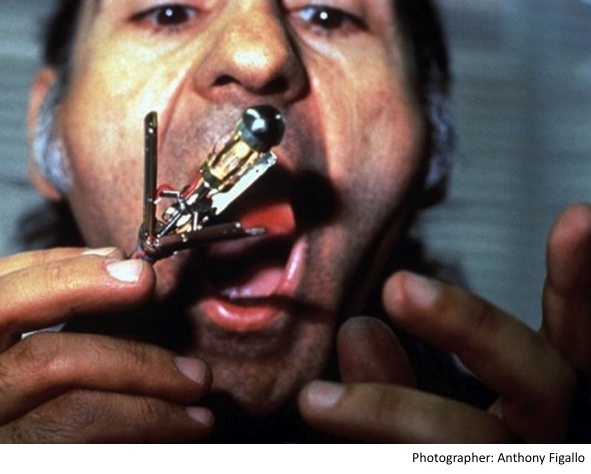 In STOMACH SCULPTURE, Stelarc inserts a crab-like robotic object into his own stomach, and then records the event through an endoscopic camera fed into his oesophagus. The aim was to construct a sculpture for the inside of the body. An automated choreography inside a soft organ. The body becomes a host for a machine, not for some medical necessity but as a result of an aesthetic choice. It is a site-specific work, not in a public space but rather in a private, physiological space. Through its worm screw and link mechanism it could close into a capsule to be safely inserted. Once inside the inflated stomach cavity it could open up and extend, with a flashing light and a beeping sound. It required as many as six insertions over a period of two days to record about fifteen minutes of video, using a medical endoscope. ©Stelarc 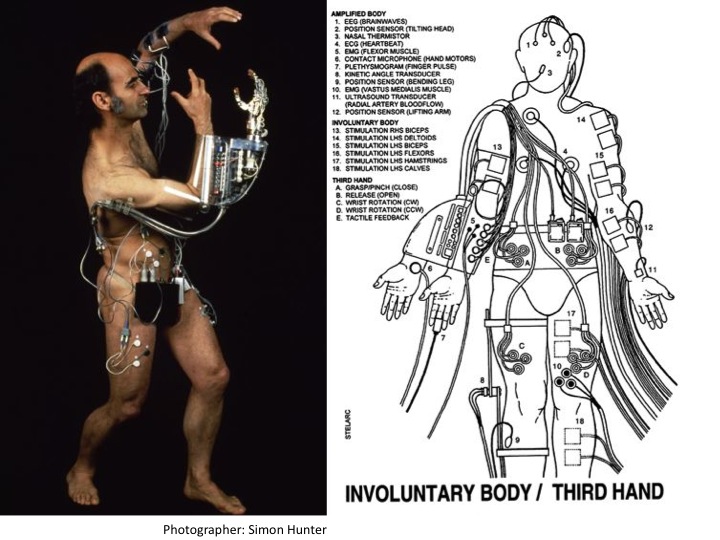 THIRD HAND. "A mechanical human-like hand that is attached to my right arm as an additional hand. It is made to the dimensions of my real right hand. The motions of the hand are controlled by the electrical signals of the muscles (EMG), typically from the abdominal and leg muscles for independent movements of the three hands. Simply, signals from muscle contractions are picked up, pre-amplified, rectified and sent to the switching system [...]" http://stelarc.org/?catID=20265 ©Stelarc 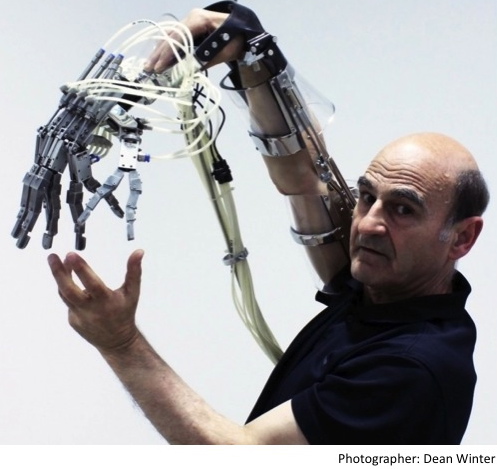 EXTENDED ARM. "The EXTENDED ARM is constructed with the aesthetic of the THIRD HAND, using materials like stainless steel, aluminium and acrylic. The pneumatics are all for the operation of the manipulator. It is a five-finger human-like hand with some novel capabilities. Its functions include wrist rotation, thumb rotation, individual finger flexion with each finger splitting open. Each finger can become a gripper in itself. The EXTENDED ARM acrylic sleeve fits over the right arm whose fingers rest on an array of 4 switches allowing the actuation of pre-programmed sequences of motion of the manipulator. The right arm becomes primate in proportion. [...]" http://stelarc.org/?catID=20218 ©Stelarc

BIO
Stelarc is a performance artist who has visually probed and acoustically amplified his body. He has made three films of the inside of his body. Between 1976-1988 he completed 25 body suspension performances with hooks into the skin. He has used medical instruments, prosthetics, robotics, Virtual Reality systems, the Internet and biotechnology to explore alternate, intimate and involuntary interfaces with the body. He has performed with a THIRD HAND, a VIRTUAL ARM, a STOMACH SCULPTURE and EXOSKELETON, a 6-legged walking robot. His FRACTAL FLESH, PING BODY and PARASITE performances explored involuntary, remote and internet choreography of the body with electrical stimulation of the muscles. His PROSTHETIC HEAD is an embodied conversational agent that speaks to the person who interrogates it. He is surgically constructing an EXTRA EAR on his arm that will be internet enabled, making it a publicly accessible acoustical organ for people in other places. He is presently performing as his avatar from his SECOND LIFE site. In 1995 Stelarc received a three year Fellowship from The Visual Arts/Craft Board, The Australia Council and in 2004 was awarded a two year New Media Arts Fellowship. In 1997 he was appointed Honorary Professor of Art and Robotics at Carnegie Mellon University, Pittsburgh. He was Artist-In-Residence for Hamburg City in 1997. In 2000 he was awarded an Honorary Degree of Laws by Monash University. He has completed Visiting Artist positions in Art and Technology, at the Faculty of Art and Design at Ohio State University in Columbus in 2002, 2003 & 2004. He has been Principal Research Fellow in the Performance Arts Digital Research Unit and a Visiting Professor at The Nottingham Trent University, UK. Between 2006 and 2011 he was Senior Research Fellow and Visiting Artist at the MARCS Lab, University of Western Sydney, Australia. From 2006-2013 he was also Chair in Performance Art, School of Arts, Brunel University, Uxbridge, UK. In 2010 he received a special projects grant from the Australia Council and was also awarded the prestigious Ars Electronica Hybrid Arts Price. He is currently Distinguished Research Fellow and Director of the Alternate Anatomies Lab, Curtin University, Perth, Australia. Stelarc's artwork is represented by the SCOTT LIVESEY GALLERIES in Melbourne. http://www.stelarc.org