Over the last ten years my work has consistently interwoven themes of gender, science, and personal experience. I am fascinated by topics that seem at first commonplace and ordinary. Yet through photography – both staged and found — I highlight our lack of understanding of such familiar subject matter. Through composition and perspective, my photographs deliberately create tension and discomfort for the viewer. 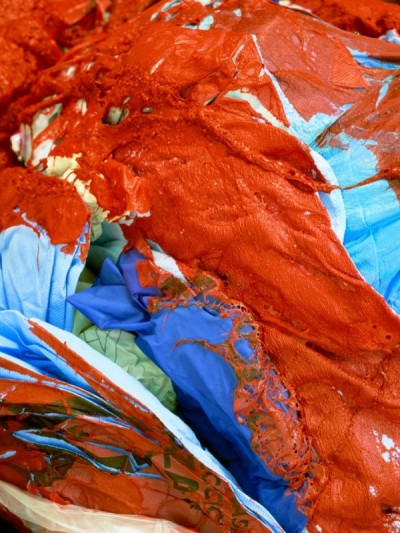 SINGLE USE ONLY. "In Single Use Only, enlarged, detailed views of autoclaved medical waste ﬂank a single bench cast from recycled waste and cement. Large-scale color photographs accentuate a wealth of surface textures and colors, transforming autoclaved medical waste into full-bodied, graceful abstractions. Predominately red and pink compositions reference the very organs, skin, cellular structures, arteries, and heart valves that have been potentially touched, cured, or protected by the medical products before they were melted. Single Use Only is a new chapter in my examination of the body and mortality in medical contexts through an extended investigation of the life of hospital waste. To ensure tools and other hazardous materials such as IV bags, latex gloves, syringes, or biohazard bags are sterilized before transfer to a landﬁll or recycling plant, they must be processed by facilities called autoclaves. Once sterilized syringes, lancets, IV bags, test tubes, gauze, and gloves— items often imprinted with the text labeled as “Single Use Only”—are all able to be recycled. This sterilized medical waste can be burned as energy to power homes and hospitals, and the ash from burning can be collected and used as an additive for cement and other construction material. I incinerated a sampling of shredded, autoclaved medical waste and mixed the resulting ashes to create the cement portion of an otherwise seemingly ordinary gallery viewing bench. Sitting on the piece of furniture becomes an act of empathy; it is an intimate connection to the material that touched illness, crime, or death—and is an atypical experience in an American culture that tends to deny death and decay. As a whole, the works serve as a visual and material parallel to the act of organ transplants or the act of recycling parts of the body—a delineation of the new energy that comes from sickness or death." ©Sarah Sudhoff 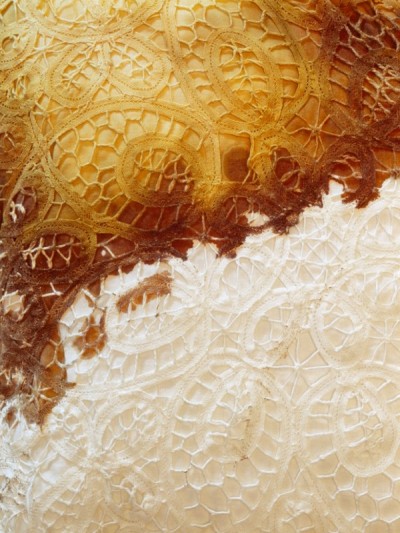 AT HOUR DEATH. "Death, like birth, is part of a process. However, the processes of death are often shielded from view. Today in Western society most families leave to a complete stranger the responsibility of preparing a loved one’s body for its final resting place. Traditional mourning practices, which allowed for the creation of Victorian hair jewelry or other memento mori items, have fallen out of fashion. Now the stain of death is quickly removed and the scene is cleaned and normalized. As Phillipe Aries writes, “Society no longer observes a pause; the disappearance of an individual no longer affects its continuity”. At the age of seventeen, I lost a friend to suicide. While visiting his home the day after the event, I witnessed a clean-up crew steam cleaning the carpet in his bedroom. All physical traces of the past 24 hours had vanished. These large-scale color photographs capture and fully illuminate swatches of bedding, carpet and upholstery marked with the signs of the passing of human life. The fabrics which are first removed by a trauma scene clean up crew, are relocated to a warehouse before being incinerated. I tack each swatch to the wall and use the crew’s floodlights to illuminate the scene. The images are my attempt to slow the moments before and after death into a single frame, to allow what is generally invisible to become visible, and to engage with a process from which we have become disconnected." ©Sarah Sudhoff 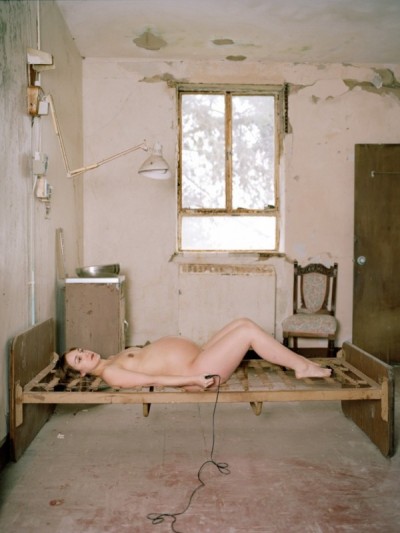 MATERNITY WARD. "Medical spaces have long held a fascination for me as both an observer and as a participant. I’m intrigued by the relationships we form with specific medical environments and how our expectations about the treatment of our own bodies is shaped by our surroundings. Maternity Ward is an in progress series exploring my role as a new mother and references my continued dependence on medical intervention. Motherhood was not something I truly expected to experience. In 2004 a portion of my cervix was removed to treat the first stages of cervical cancer as a result of HPV. I feared I wouldn’t be able to conceive let alone carry a child to term. In the early months of my pregnancy my cervix was checked often which also led to the discovery of a placenta previa. Both medical conditions were monitored closely and although not immediately life threatening caused emotional anxiety throughout most of my pregnancy. In much the same way I staged prior self portraits taken in medical environments, I worked very intuitively in the abandoned Yorktown Hospital. Limited by lack of air conditioning or heat and inconsistent access to power, I let the space and light dictate where and when I would photograph. I was drawn to three specific spaces–the nursery, labor and delivery room and the kitchen. Using only what was on hand I began to weave a small narrative through the space each time I returned–the images became not only a record of my pregnancy and my physical changes but also revealed my changing emotions towards my son and the many unknowns ahead of us." ©Sarah Sudhoff 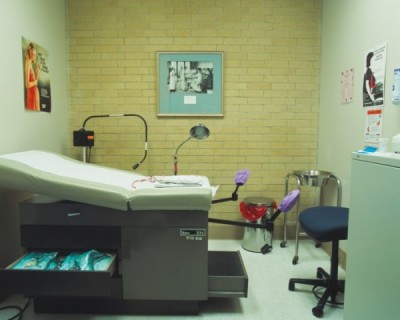 REPOSITORY "I examine the body within a medical context by exploring through large-scale photographs four main themes: pathological waste; containment of the body and its parts; fragmentation and violence against the body; a subject’s relationship to a specific environment. Following my surgery in 2004 for cervical cancer, I began to photograph and perform in hospitals, morgues, medical museums and my doctors’ offices. The photographs and videos focus attention on the physical and emotional traces cancer and surgery can leave on the body while challenging the prescribed treatment for recovery and role of the patient. Through self-portraiture and self-performance, private rituals are revealed to the public only through documentation. Personal experiences will illness and mortality are intertwined. The same character’s presence in many of the works allows for an introspective look at these, in some cases unfamiliar worlds in comparison to one another. The repetition of spaces, procedures and a central character highlights and reshapes our thoughts on medical environments, the treatment of our bodies in these spaces, what role we have at protecting our bodies and the lengths we will go to achieve a sense of health. While the journey stems from a personal bout with cancer, I hope to resonate with each viewer as they reflect on the work." ©Sarah Sudhoff 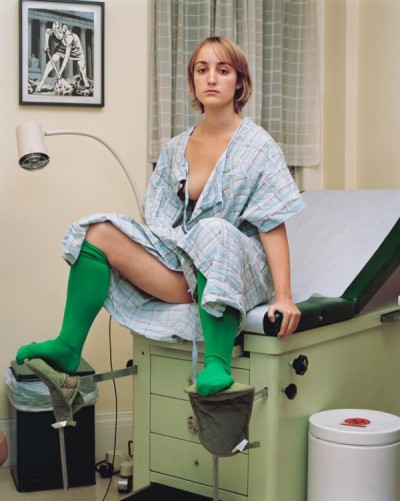 BIO
Sarah Sudhoff is a fine art photographer and educator based in San Antonio, Texas. Her work has been exhibited internationally and nationally and her images have been featured in print and online. In 2008 Sudhoff was chosen for Photolucida’s 2008 Critical Mass Top 50 Photographers award. Also in 2008, images from Sudhoff’s Repository series were selected for: New Art in Austin: 20 To Watch exhibition at the Austin Museum of Art; 31 Under 31: Young Women in Fine Art Photography at 3rd Ward Gallery; Self-Evident: Contemporary Self-Portraiture at Claypool-Young Gallery. In 2009 Sudhoff had her first solo show, Repository, open at Art League Houston followed by her first international show, Rx, at In Plain Sight Gallerie in Montreal. In 2010, Sudhoff’s series At the Hour of Our Death debuted at De Santos Gallery during Fotofest. Also in 2010 the work earned honorable mentions from Daylight/Center for Documentary Studies award and En Foco New Work’s award followed by an Artist Foundation of San Antonio grant. A short documentary film on the series was released in October of 2010 for Glasstire.com. In 2011 At the Hour of Our Death was awarded the Magenta Foundations Flash Forward award. In 2012 To the Best of Our Knowledge’s Anne Strainchamps interviewed Sudhoff about her series for the segment Minding Mortality. Also in 2012, Sudhoff was awarded an international artist in residency at Artpace concluding with an exhibition. In 2013 Sudhoff debuted her performance Surrender in Mexico and her work appeared in the December issue of Cabinet Magazine. Most recently, Sudhoff was one of 30 artists nationwide awarded the Louis Comfort Tiffany artist grant. Sudhoff holds a Master of Fine Arts in Photography from Parsons the New School for Design and a Bachelor of Journalism from the University of Texas at Austin. She is founder of Photohive and co-founder of the Austin Center for Photography–non profits dedicated to cultivating a vibrant photographic community for professionals and students.