I am a biomedical artist. My work is research-based. I make observations and experiments and record these in detail. I draw, paint and sculpt the internal and external human body in all its wonderful diversity. Life and nature in all its beauty and strength, fragility and disease, mortality and death – all this and more is what inspires me. In addition to my own art I work for a wide range of disciplines, which I find expands my horizons in many unexpected ways; the medical and scientific professions, hospitals, pharmaceutical companies, publishers, TV, theatre, film, and I often collaborate with other artists and scientists. The materials I work with are wax, clay, plastoline, sculpey, oil paint, silicone and polyester, human hair and other natural materials, graphite pencil, ink, watercolour, Photoshop and Illustrator, etc… I work on a Mac. New technologies and philosophies are my allies; quantum physics, nanotechnology and animatronics I find very interesting and these elements are slowly seeping into my work.

THE QUICK AND THE DEAD

I doth require your disengaged frame, your relinquished mould

before this beautiful perfection mingles moist turf and oak

and throwes of graveyard soil

many brights have wrought

and eyed upon thee

and chalked eternal masterworks from thee

to medic shaman and artist 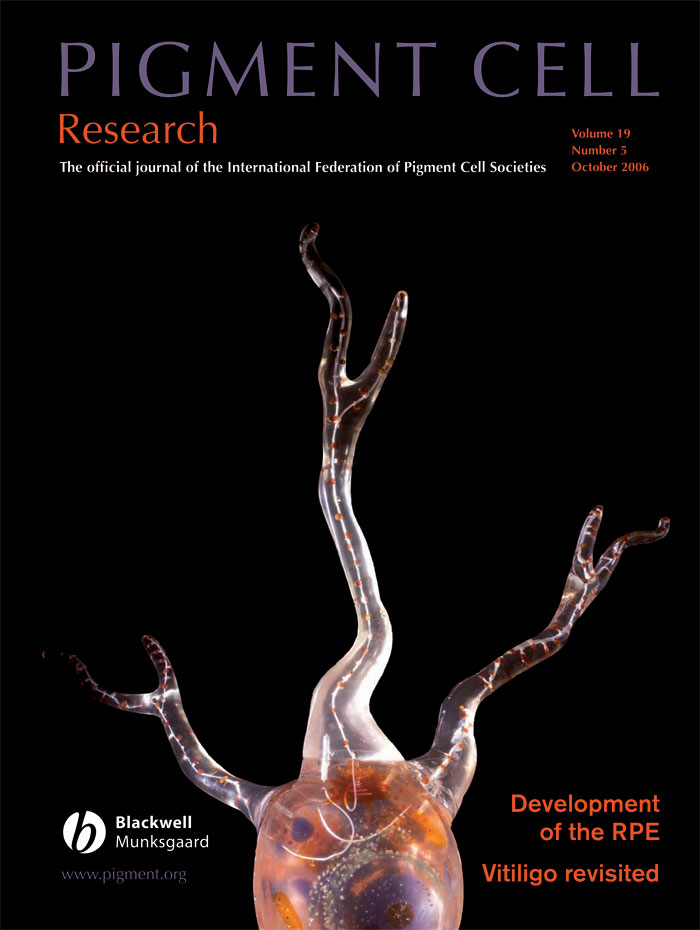 "Melanocyte" (clear resin, 1.14 X 61,5 cm, 1999). Made as part of a larger project, researching the causes of albinism, the melanocyte sculpture is an illustration of a normal melanin-producing pigment cell. This work shows the different stages of melano-genesis. I wanted the sculpture to reflect the fluid nature of a cell, a little pond of life, constantly in motion, hence the choice of material, clear resin. A photograph of this sculpture was chosen for the cover of the Pigment Cell Research Journal. The sculpture itself won the prize of "Best Entry" of the exhibition at the MAA / IMI 2000 joint conference at Cambridge University (England). ©Pascale Pollier 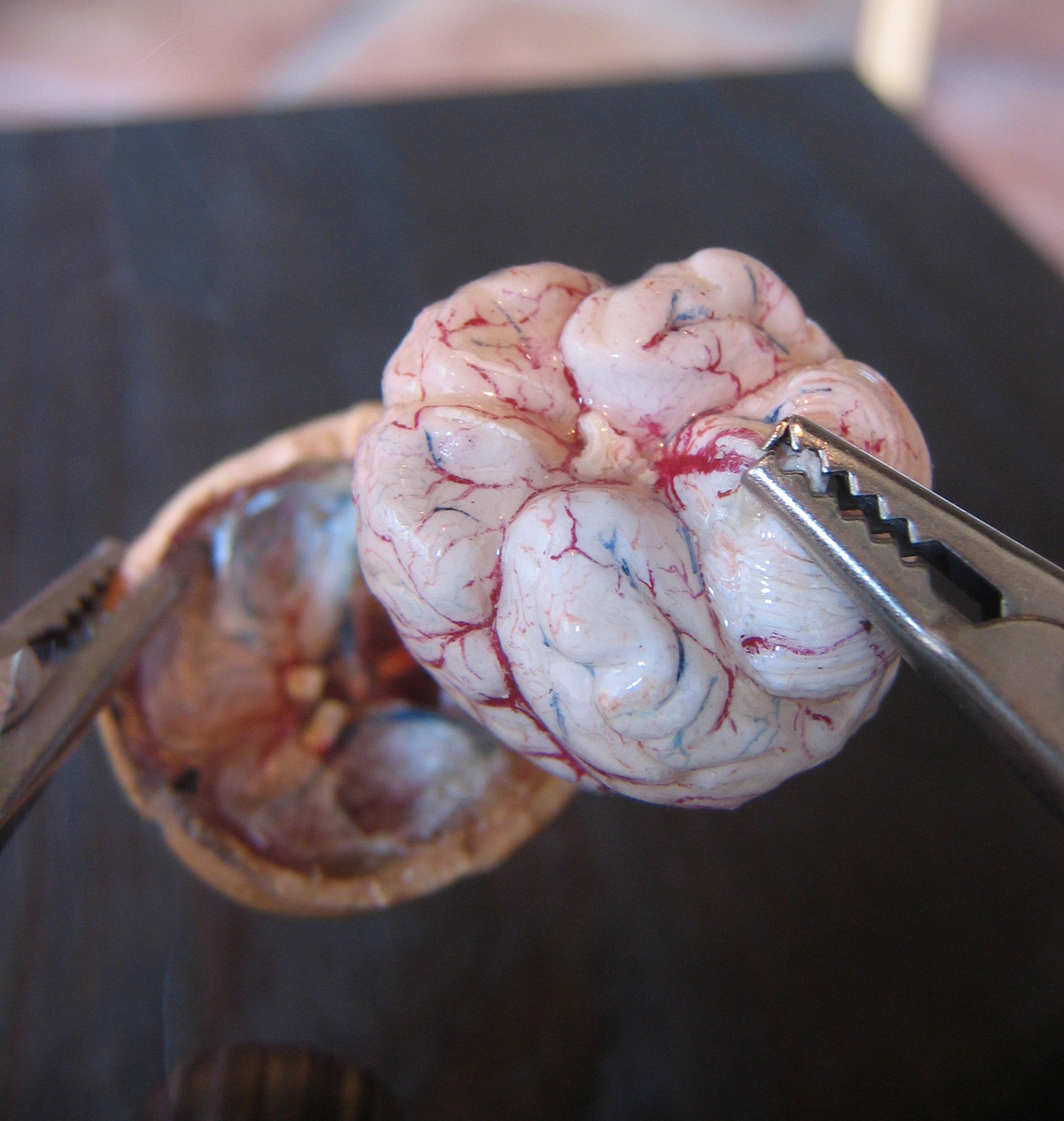 "Autopsy in a Nutshell" (mixed media, 30 X 30cm, 2006). This work was created after witnessing an autopsy. I saw a brain being removed from the skull and it was placed in my hands to observe. This experience made a profound impression upon me. Holding this young man’s brain, which contained all the experiences of his life, was very humbling. The magnifying glass in this sculpture represents the observer. The size of the brain and the reference to the walnut was dictated by the desire to highlight the link to nature and the micro-macro cosmos, all of which is interconnected and beautifully synchronized. My sculpture features in an article of Nature Magazine: 10/02/2011, vol. 470, p.173 by Martin Kemp Emeritus Professor of the History of Art at the University of Oxford, UK [Read the article here: http://www.unm.edu/~mdlane/index_files/researchPDFs/nature-review.pdf] ©Pascale Pollier 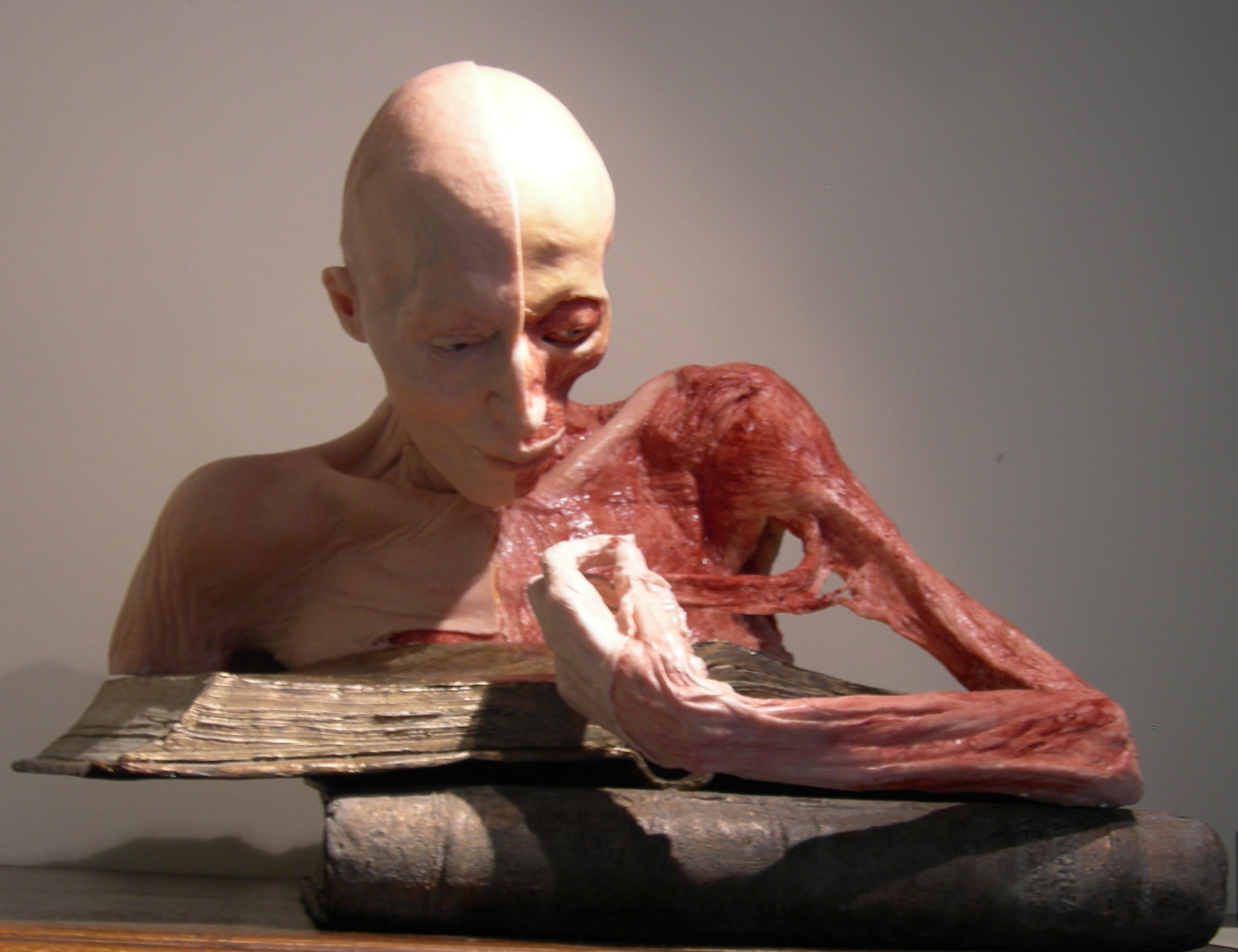 "Confronting Mortality" (wax, life size, 2007). Made as a commission for the anatomist and elbow specialist Prof. Francis van Glabbeek, this wax model was created for the exhibition held at the conference ”Confronting Mortality with Art and Science. It portrays a man contemplating his own mortality. ©Pascale Pollier 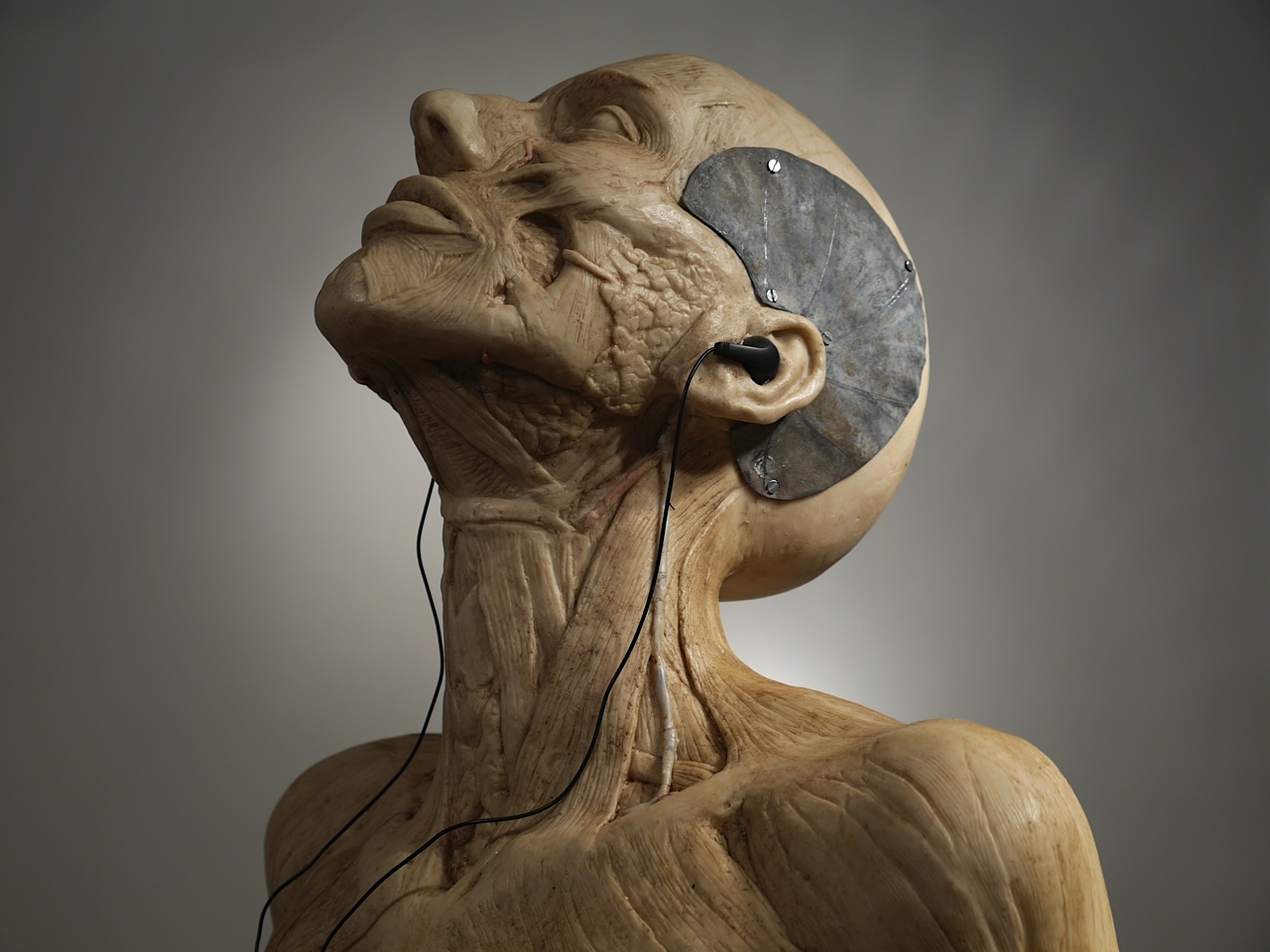 “Female écorché" (wax, polyester, lead, headphones, 1.90 m, 2009). This sculpture, which portrays myself as a flayed female, is showing the strength and fragility of the human body. When one is naked one reveals the vulnerability of the self and the ego, but when stripped of skin one exposes a human vulnerability. Still, the woman stands strong, although communication has been interrupted, which is a sign of our times. Integrated into the digital, she is wearing headphones and is gazing upwards so no eye contact is possible. She has the headphones wired to her heart, thus she is tuned in to her emotions. ©Pascale Pollier 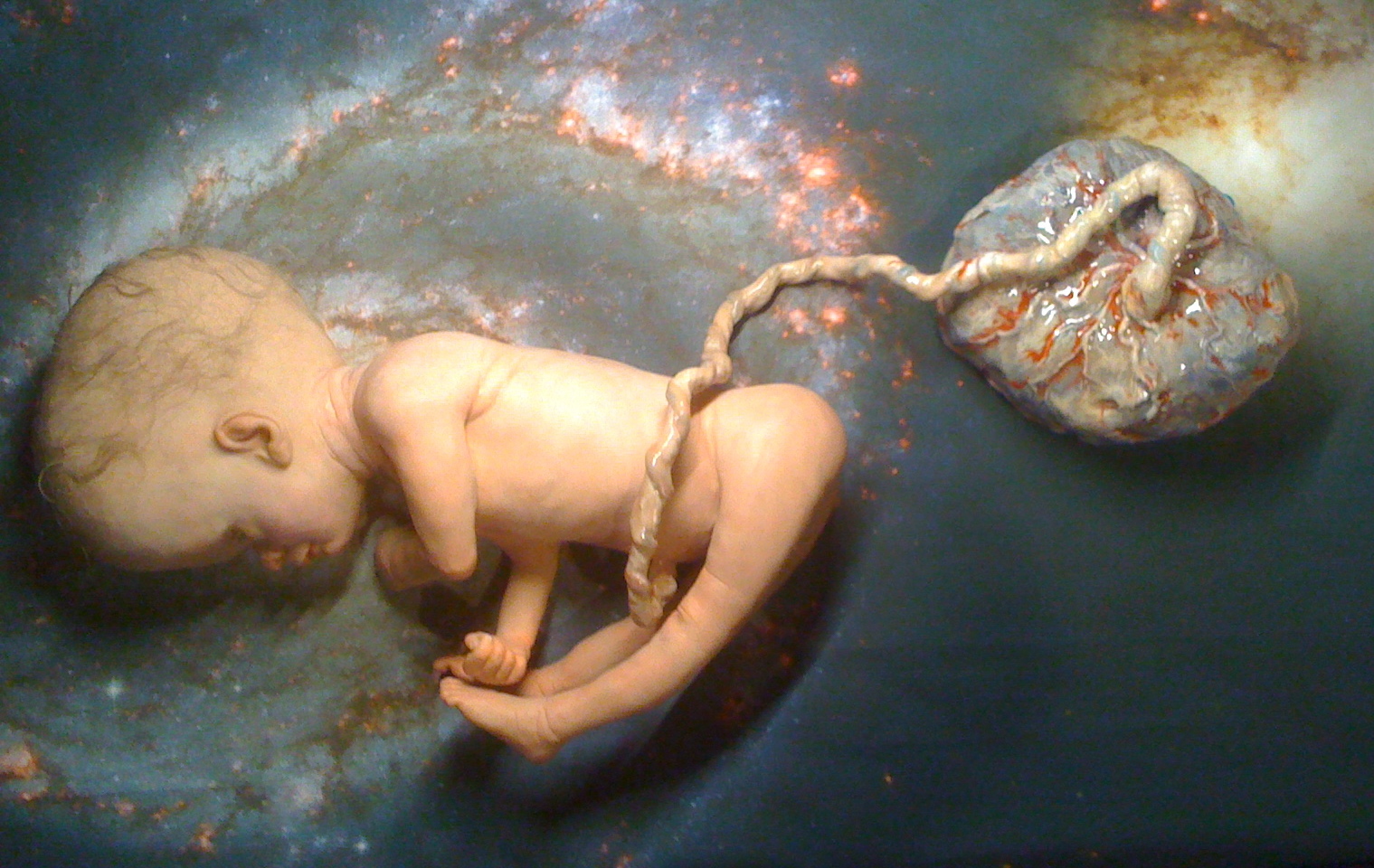 "Tesla’s Angst; A Tragedy of Errors" (polymer clay, hair, paint, MP3 player, 2012). This sculpture, of a newly born baby, was the result of having seen a distressing photograph of a deformed infant born after the Gulf War. The presence of depleted uranium in some of the war-heads is thought to be the cause of many deformations and birth defects. The sculpture would thus be seen to represent our fears of the possible future. The placenta, which represents our food source, our energy source, is petrified by nuclear radiation and is no longer functioning. Underneath the placenta is an MP3 player with the eerie sound of a geiger counter detecting radioactivity. Nikola Tesla would turn in his grave. ©Pascale Pollier 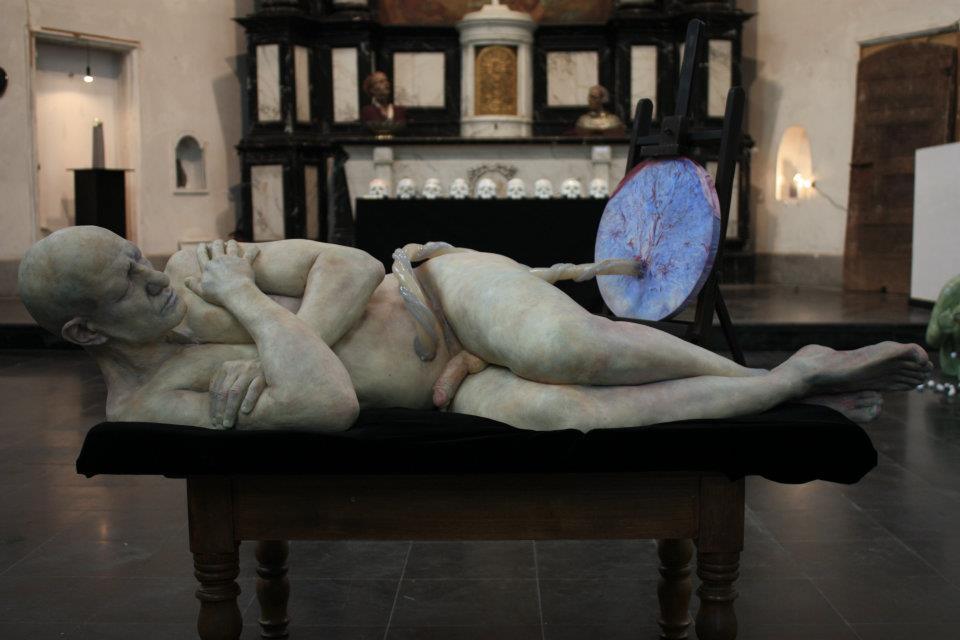 "APGAR Score 3 With Aggravated Nervous System" (wax, silicone, canvas, oil paint, life size, 2011). This work represents the birth of a sculpture from a painting. It depicts a fully-grown man lying in the fetal position and is connected by his umbilical chord to a painting of a placenta. The sculpture is about birth and death, innocence and sexuality, fragility and strength. The nerves of his spinal cord are laid bare, for the senses are awakened as soon as one is born. One comes into life and feels. ©Pascale Pollier 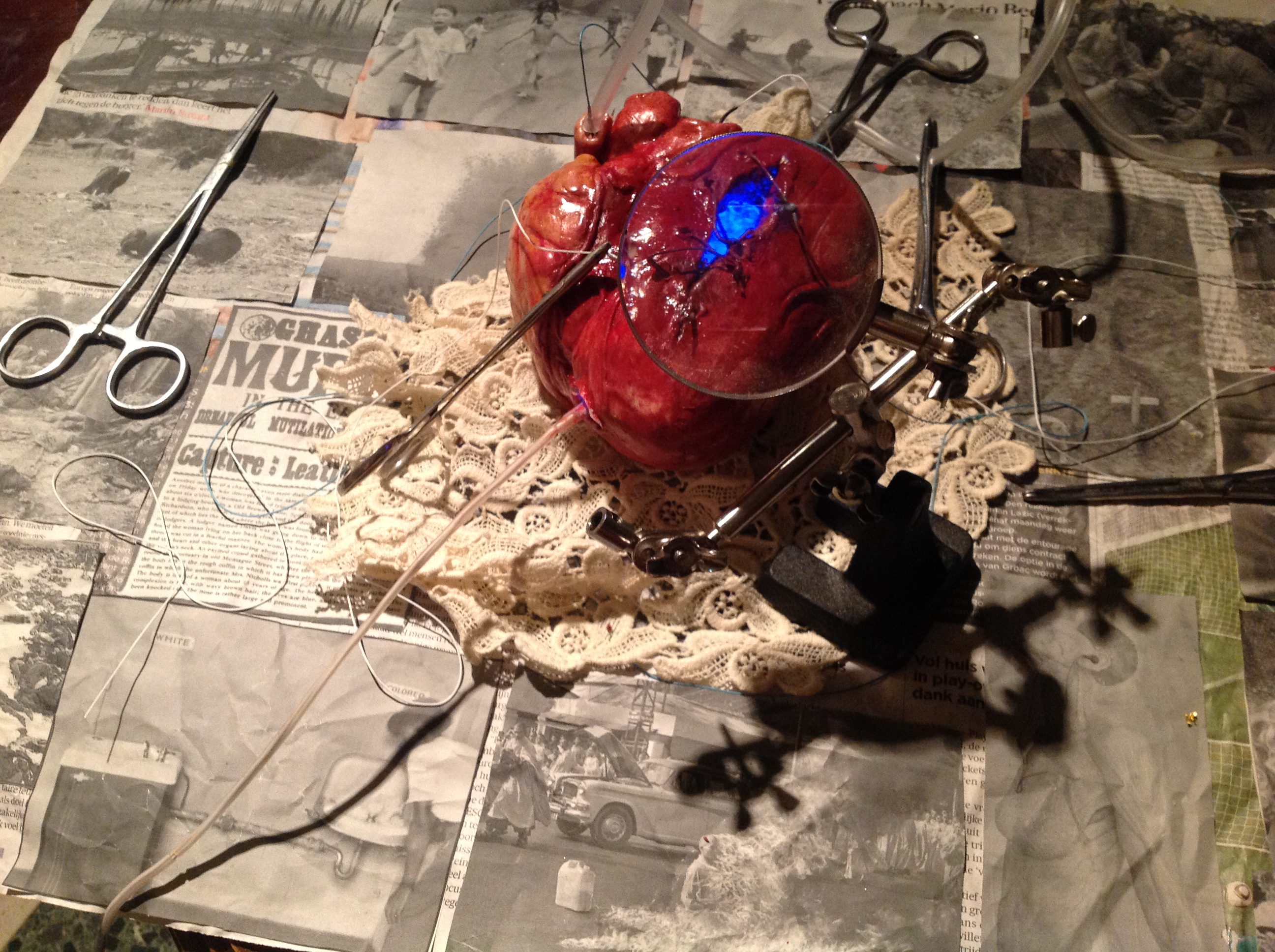 "History Of Hurt I": The Heart Wax (LED light, newspaper, 2013). An opened-up, wounded heart lies on a newspaper displaying headlines of sad and terrible world news. The medical instruments, representing science, are attempting to undo the hurt humanity has suffered through the centuries. The heart-strings, inside the heart, can be viewed through a magnifying glass, signifying the fact that we are all passive observers in this game of life, seeing and looking on in frustration. ©Pascale Pollier 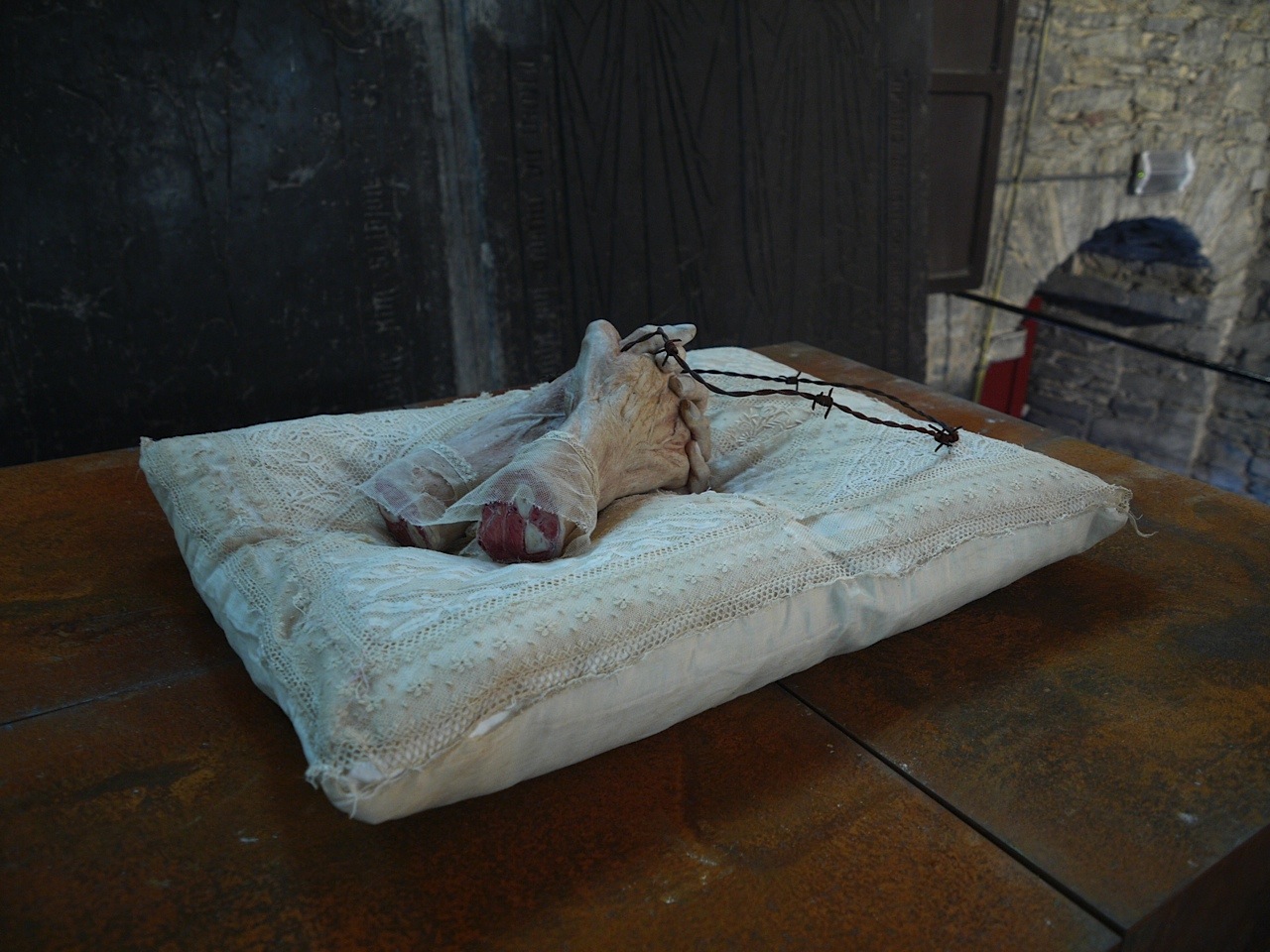 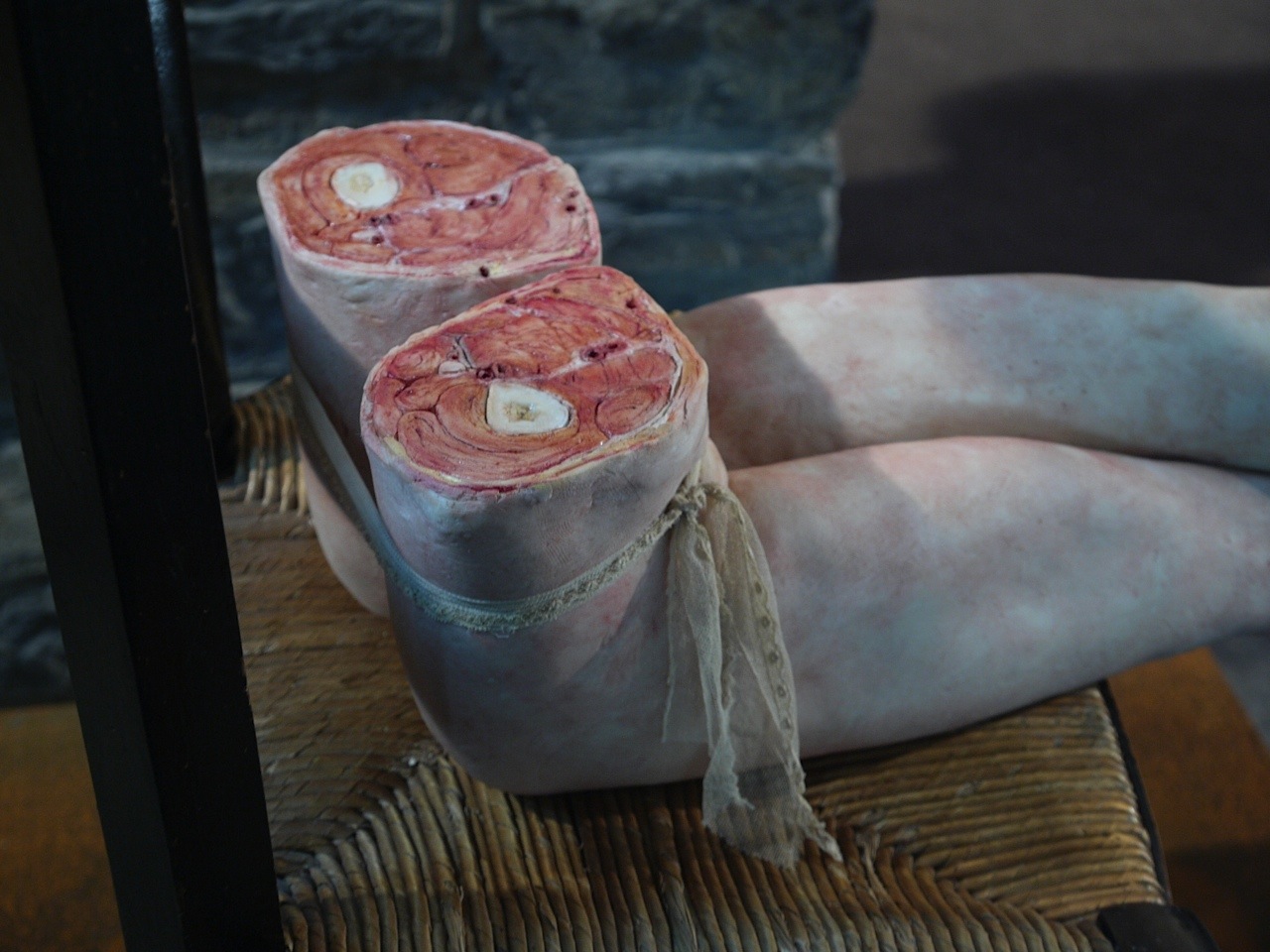 “History of Hurt III” The Ruin of innocence (wax, 2013). The kneeling phantom of a praying child. This work is concerned with the ruination of innocence and nature in this often cruel world. ©Pascale Pollier 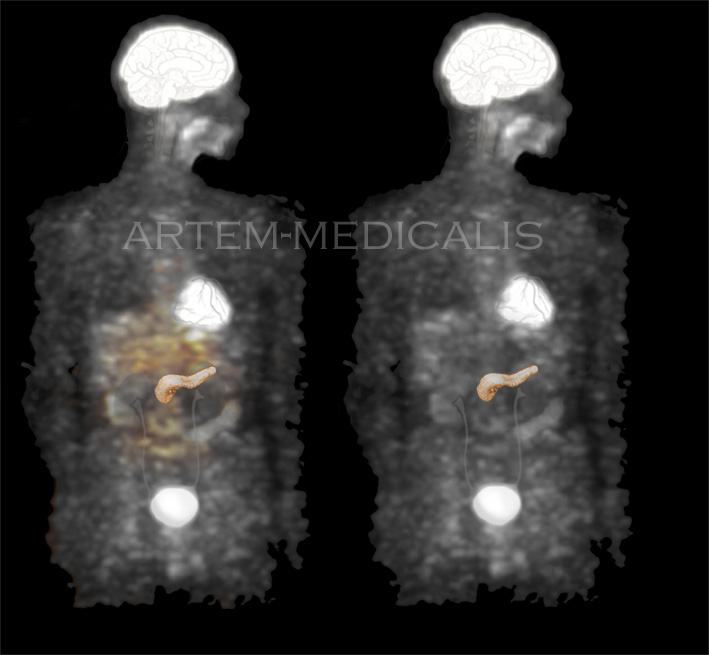 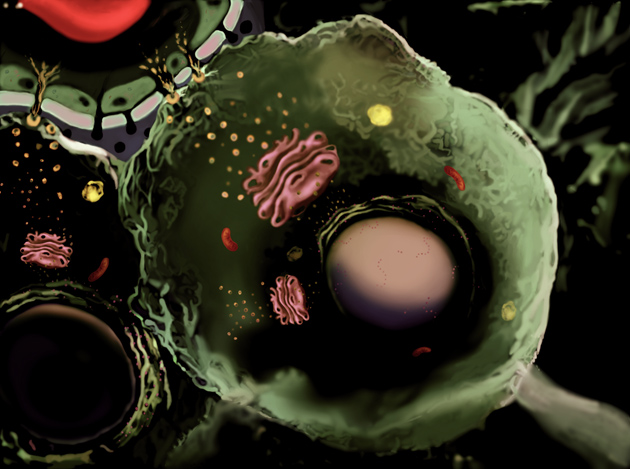 "Beta Cel", photoshop, 2005. This illustration was made as a commission for the front cover of a book about diabetes, published by a Dutch wholesale pharmaceutical company MMG. ©Pascale Pollier

"The Body Systems", photoshop, 2004. An illustration for MMG. ©Pascale Pollier 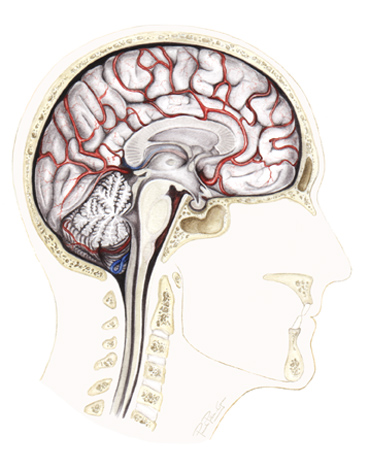 "The Location of the Pituitary Gland in the Brain", Water-color, photoshop, 2004. an illustration for MMG. ©Pascale Pollier 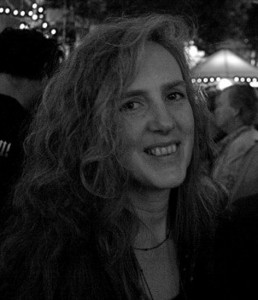 BIO
Pascale is a sculptor/artist who is interested in the melding of art and science. A Belgian National, she studied fine art and Painting in St Lucas art school in Ghent, Belgium and subsequently postgraduate training with the Medical Artists Association, London UK. She is president and co-founder of BIOMAB (Biological and Medical Art in Belgium) http://biomedicalart.blogspot.co.uk/. In 2010 the international collaboration program "Art Researches Science " was created, http://art-researches-science.blogspot.co.uk/ organizing exhibitions, dissection drawing classes, collaborative art/science projects, symposiums and conferences. The International collaboration partners are: Universities of Antwerp, London, Dundee, Strasbourg and New York. She is an external examiner for the medical art course at The Centre for Anatomy & Human Identification, University of Dundee. She is President of the AEIMS (Association Europeenes des Illustrateurs Medicaux et Scientifiques) http://www.aeims.eu/ . She works and lives in London as a self-employed artist ”artem-medicalis”.