My art practice focuses on human anatomy and its symbiotic history with arts and technology. Utilizing the mediums of drawing, photography and new media I explore through my artwork the internal architecture and perceptual awareness and abilities of the acculturated body as embedded in the world and mediated by technology.

The proliferation in science of various anatomical images, both historical and modern, defines for us different approaches to the human body. These approaches are all a combination, in varying degrees, of theory, observation, culture and technology. Anatomical images are never truly objective; they are created in the context of their time, and are therefore subject to the technologies and beliefs of that time.

My current research analyses the construction of anatomical images, focusing on the role that light plays in the translation of flesh into image. Conceptualising light as an instigator rather than passive illuminator of knowledge I investigate the idea that, with the advent of new technologies which are able to emanate, record and capture light, our perception of the anatomical body alters and a new body is imagined. 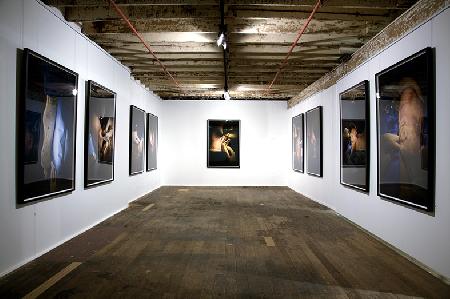 OBLIQUE. In 2006 Sellars travelled to Los Angeles, with the assistance of an Australia Council grant, to photograph the surgical construction of Stelarc’s Extra Ear project. The surgery involved an ear being created on Stelarc’s left forearm. The photographic outcome was the Oblique series, a set of tightly framed images of the surgery. Printed large and hung vertically, the images gain intimacy by taking a segment of a body to form an anthropomorphic whole. Joanna Zylinska states in the exhibition catalogue essay: ‘What Sellars therefore offers us with Oblique is a series of TV screens which are subversively hung as mirrors.’ ©Nina Sellars

CREATION. Is an interactive computer installation that re-stages Michelangelo’s The Creation of Adam. Taking only three of the figures from the original painting and recreating them as virtual 3D anatomical constructs, Creation presents the figures as partially finished, hollow bodies with their internal anatomy worn only as skins. The artist’s anatomical pencil drawings, completed in separate sections, were digitally stitched together to form an external covering on the wire frame armatures. The wall-projected animation is 5 metres tall. When the viewer enters the installation space they are positioned so as to see the figures as if through the eyes of Adam. The viewer’s movement around the space, detected by way of camera sensors, animates the figures creating a choreography between the screen image and the viewer. The figures rotate and pass through each other, as fixed individual components, in what appears as a mechanical process. On the adjacent wall is projected a screen from the computer showing the sine wave pattern indicating the sensors activity. Sound has also been mapped on to each individual figure and is produced in surround sound. Creation was exhibited at the John Curtin Gallery, Curtin University as part of the Perth International Arts Festival, 2005, and funded by an ArtsWA BEAPworks Grant, for research and development of electronic arts. ©Nina Sellars 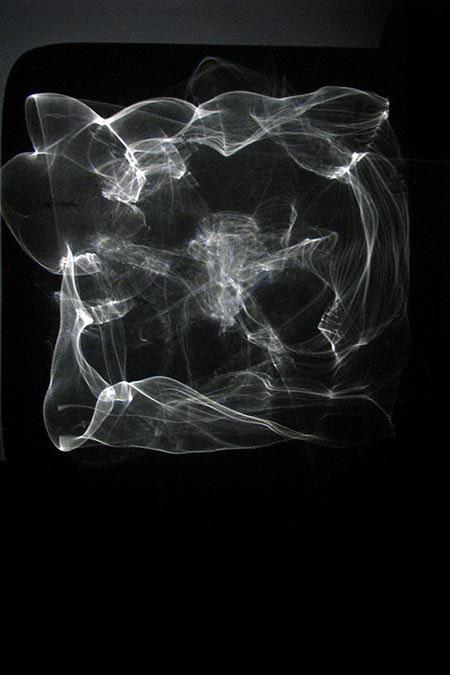 LUMEN. Lumen is intended as a poetic exploration of light in relation to the microscopic study of cells. Cells are the self-contained structures that constitute the basis of all life forms, but it is the way in which they have been visualised not their physiological function that informs this work. Microscopy provides a magnification of sight and an intensification of light that allows us to view what has previously lain invisible. This effectively creates images that are reliant on host specimens which paradoxically they do not resemble. Similarly in Lumen there appears a disparity between the image that unfolds on the gallery wall, and the small glass component that acts as its host. The intricately detailed cell-like image dominates over the clear-glass plate from which it emanates; their connection only made apparent by their matched incremental rotation. The kinetic image is produced by directing a small, but intensely bright light source at the glass while it turns on a platform. This allows real-time scans of the previously invisible interior of the glass to be projected onto the gallery wall. Lumen appears both mechanical and organic and speaks of a vision that is only attainable through the mediation of technology. It immerses the viewer in a space where light no longer only illuminates surfaces, but also defines volumes without mass. The title of the installation is a play on the double meaning of the term lumen, as a unit of luminous flux, and alternatively, the central cavity of a tubular or other hollow structure in an organism or cell. Lumen was exhibited at GV Art gallery in London, as part of a group exhibition titled 'Art and Science: Merging Art and Science to Make a Revolutionary New Art Form' (curated by Robert Devcic and Professor Arthur I. Miller) 2011. ©Nina Sellars 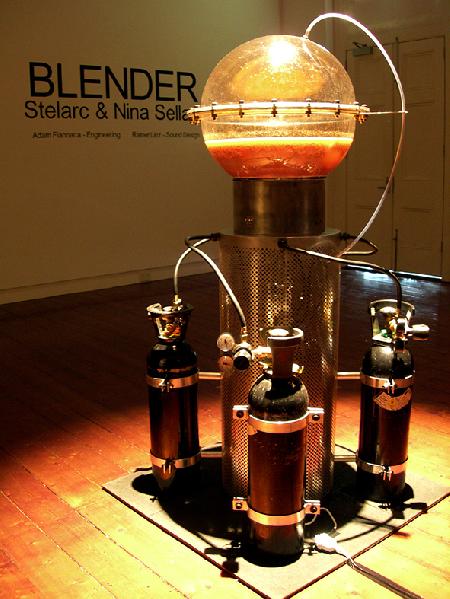 BLENDER. Is an installation created in collaboration with the performance artist Stelarc. Both artists underwent surgery to remove biomaterials; from Stelarc’s torso and Sellars limbs. The extracted bio-materials, from the bodies of both artists, are housed in a custom built blender of anthropomorphic dimensions. Every few minutes Blender automatically circulates its contents via a pneumatic actuator connected to a system of compressed air pumps. The click of the solenoid switch operating the blending mechanism has been subtly amplified. With added distortion and digital delay it provides an audible pulse to a liquid body. Blender was exhibited at the Meat Market Gallery, as part of the TekniKunst 05 Contemporary Technology Festival, Melbourne, 2005. ©Nina Sellars 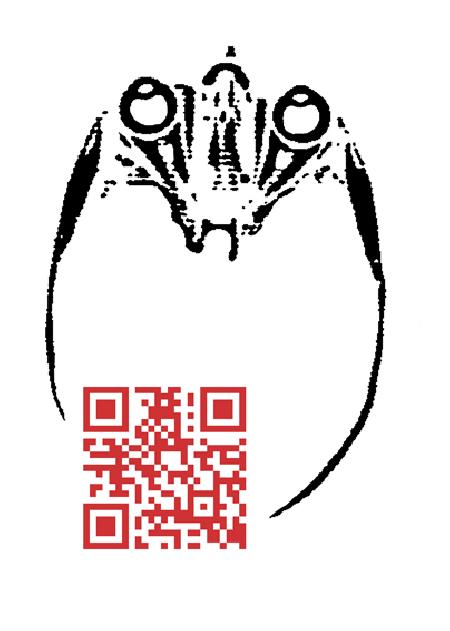 SCAN. The focus in Scan is on the enactment of knowledge, as it unfolds as a process, through the imaging of anatomy. Scan contains an encoded body of information in the graphic form of a QR (quick response) code. The code links to, and activates, an online animation that comprises MRI (magnetic resonance imaging) scans of the artist's brain. Sellars' brain has been encoded and decoded, and made visible through multiple acts of mediation. In Scan the brain is not only dematerialised, but also mobilised, taking it from the physical space of the gallery to the virtual space of the Internet. When a gallery visitor scans the QR code on their mobile phone, it hyperlinks them to a URL site that hosts the auto-play animation. This enables viewers to leave the exhibition with effectively a little brain playing in the palm of their hand. The MRI scans in the animation show the artist's brain after the surgical removal of a tumour that was situated centrally in the brain on the pineal gland.Scan has been exhibited at: Wellcome Trust, London ('Brains: The Mind as Matter' - 2012), Fehily Contemporary, Melbourne ('Optics of Anatomy and Light' - 2012), Ian Potter Museum, Melbourne University ('A Body of Knowledge - The Anatomy Lesson' - 2012/2013), Biomediations Transito-MX05 (the Festival of New Media Art and Video in Mexico City, Mexico - 2013). ©Nina Sellars 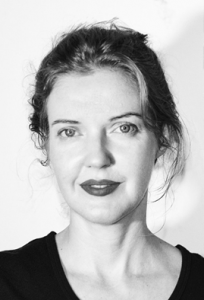 BIO
Nina Sellars is an artist and Research Fellow at the Alternate Anatomies Lab, School of Design and Art, Curtin University, Perth, Australia. Sellars lectures on anatomy for artists and is a trained Prosector (i.e. dissector of cadavers for medical display). Her artwork hybridizes the disciplines of art, science and humanities and focuses on the contemporary and historical influence of anatomy on our understanding of the body, identity and subjectivity. Classically trained in drawing her artwork now extends into multimedia light installations, as her interest in anatomy has taken her from working in wet anatomy labs to working in physics labs here she explores the cultural implications of clinical imaging modalities. [For a full version of Nina Sellars' Curriculum Vitae follow this link: http://www.ninasellars.com/?catID=5 ]