From the Nano to the Geo

We are supremely lucky as water-based life forms to be blessed with the consciousness to enjoy the beauty of our planet. Because we live in an age in which we are beginning to explore advanced technologies, we are able to simultaneously look within ourselves and to the outermost reaches of the cosmos. I explore this unique relationship in my work.

Geotherapy is a practice that embraces the future by addressing the link between cultural and biological evolution. By using the principles of Geotherapy, my work encompasses the cross-section between art, technology, and social change. Many of the sculptures translate microscopic and scientific data into large-scale figurative forms. The viewer, upon engaging with the art, takes part in how life functions beyond the lens of what the human eye can perceive. In many cases, the work depicts the human impact on this delicate microscopic world. My most current projects combine living aquatic structures with sustainable environmental technology. The sculptures function as habitat, coastline protection, and bio-remediation filters. The final intention of my work is to create awareness of the beneficial impact of Geotherapy on our planet. 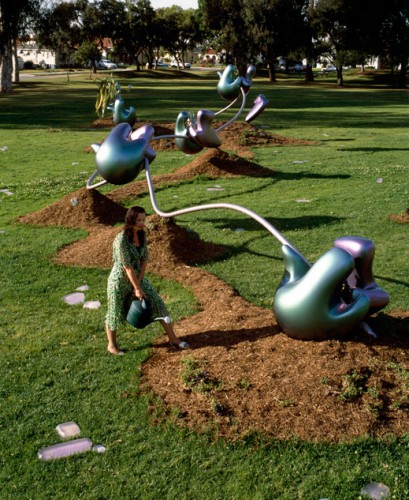 "Waltz of the Polypeptides" The inspiration for Waltz of the Polypeptides (2003) comes from one of the smallest muses on the planet, a subject so tiny it can only be seen with an electron microscope. It is a sub-cellular organelle called a rhibosome. Within each cell, ribosomes produce the smallest functional elements in all living organisms, proteins. In Waltz of the Polypeptides the viewer literally walks through the birth of a single protein.To create this work, Mara G. Haseltine studied the ribosomes and proteins and used accurate molecular renderings of electron microscopic and nuclear magnetic resonance images for her armatures. She manipulated this raw data using a 3-D computer program into a design which kept the integrity of Mother Nature’s form while simultaneously creating a work that was comprehensible and pleasing to its viewers. She then fabricated this design into three-dimensions using computer-driven 5-axis milling and rapid prototyping technologies. The work itself was created to be part of a living landscape inspired by the Zen gardens of Kyoto. Each part of the landscape represents a different part of the cell. Thus, when the viewer experiences “Waltz of the Polypeptides,” they are fully immersed into a fantastical environment based on a tiny part of the human body. [Materials: paint, metal, fiberglass, landscape, cast glass. Dimensions: 84′ long, 17′ high, 9′ wide] ©Mara G. Haseltine 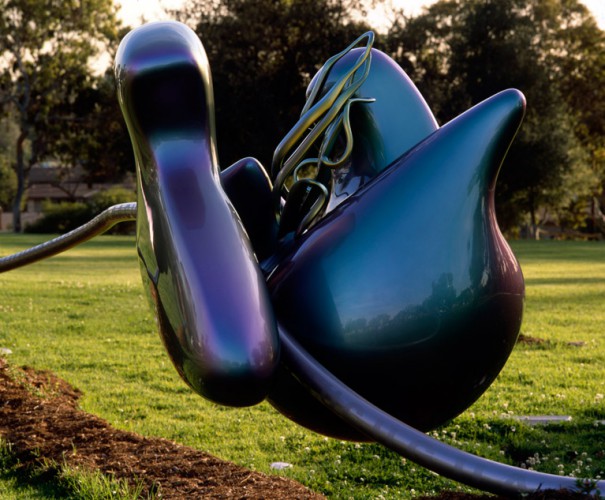 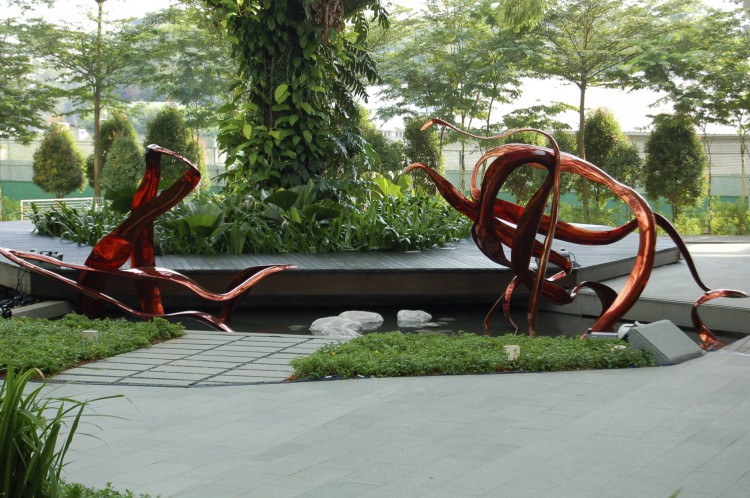 "SARS Inhibited" Mara G. Haseltine was awarded the honor of designing the installation located in the Epi-Center of Singapore’s Biotech mecca Biopolis, which was designed by architect Zaha Hadid. SARS (2006) was to create an outsized bronze sculpture for outdoors depicting the functions of the SARS Protease Inhibitor, which was discovered by an international team of scientists working at Biopolis. [Materials: bronze, paint, rocks. Dimensions: 30′ wide, 9′ tall] ©Mara G. Haseltine 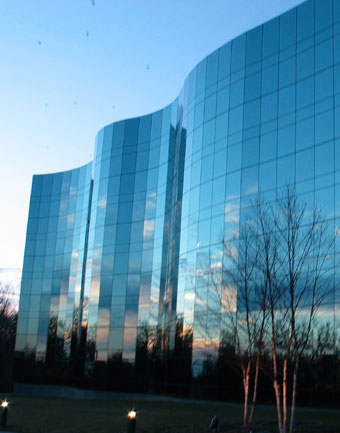 "Human Genome Science Building". [Materials: mixed media]. Although Waltz of the Polypeptides looks rather extensive in its spread, it was designed to travel easily. It was originally created with the Human Genome Campus in mind in Rockville, Maryland. Mara G. Haseltine worked closely with an architectural team from the Davis Carter Scott firm to create the shape of the Human Genome building in 2001. The theme she was addressing was water, the life source of all living creatures. The asymmetrical glass curves of the building are reminiscent of a wave which changes colors each moment of the day as water does with the reflection of the sky. ©Mara G. Haseltine 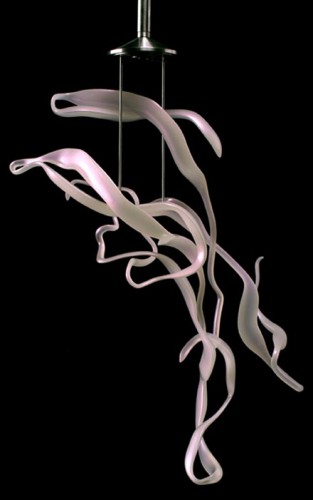 Follicle Stimulator Hormone [Materials: SLS plastic, autobody paint, metal] Mara G. Haseltine was commissioned to create Follicle Stimulator Hormone (2004) by the company Serono located in Geneva, Switzerland based on the ribbon diagram depiction of the follicle stimulator hormone. The work celebrates 30 years of outstanding work by the scientist Aliza Eshkhol. Eshkhol did groundbreaking work on the purification of the Follicle Stimulator Hormone in 1961 which is now sold by Serono as Pergonal, a fertility drug which has helped thousands of pregnancies. Aliza’s work was pivotal in creating the some of the first bio-engineered medicine on the market. To create this sculpture the artist utilized a unique technique she has developed in which she uses accurate sub-molecular data as the armature for her work which she then contoured in the computer and realized in three dimensions via stereo lithography. ©Mara G. Haseltine 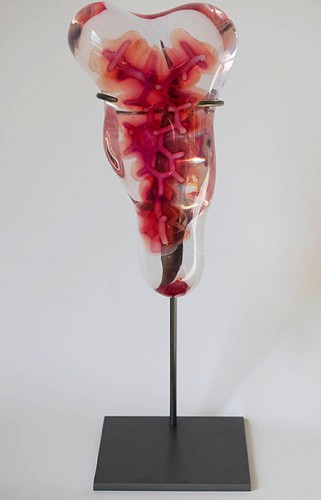 "Estrogen" [Materials: SLS plastic in triple embedment of cast acrylic] Estrogen (2006) is an illuminated sculpture in the shape of an estrogen molecule, etradiol benzoate, designed by Mara G. Haseltine. The sculpture was designed to be used as the trophy awarded to winners of the Medtronics Award, which is given by the Society for Women’s Health to an outstanding female scientist. ©Mara G. Haseltine 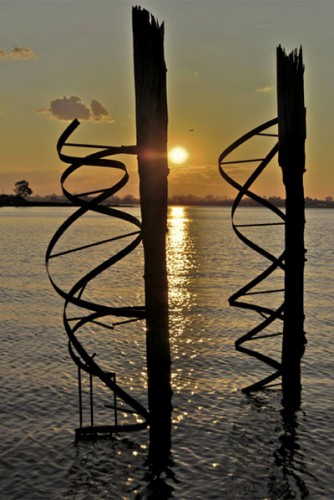 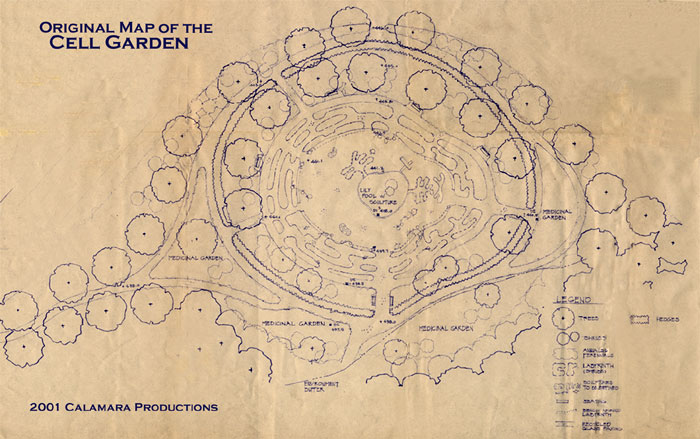 "Cell Garden" The Cell Garden as an Earth Work (2001), a multidisciplinary project first conceived in 2001, is a fusion of science, art, education, new technologies, and sustainability. The work is figurative in that it combines sculptures and landscape to depict a cross section of a living animal cell or Eukaryotic Cell. The choice to represent a Eukaryotic cell, the same kind of cell that comprises our bodies, was made so that when visitors venture within the membranes of The Cell Garden, they will take an internal journey. The Cell Garden is meant to be experienced on a micro and macro scale – it possesses both an aerial dimension and a terrestrial dimension. As seen from an aerial perspective The Cell Garden stands out from its surrounding landscape, like a verdant crater pulsing with life. At ground level, viewers will have a more intimate experience as they enter the garden and immerse themselves in the living landscape of the cell. The purpose of The Cell Garden is twofold: It is a site for contemplation and experiencing art, much like a Zen garden, as well as an educational experience in which people of all ages and scientific backgrounds will witness firsthand the functioning of a living cell. For the first time in human history, it is possible to examine and analyze the most minute substances we are made of, and to categorize them as three-dimensional data in the fast-growing field of bioinformatics. The Cell Garden will embrace sustainability and will utilize alternative forms of energy, such as solar power and wind power. Many of its components will be composed of recycled materials, and it will also have an agricultural element. The Cell Garden is a gesture toward self-knowledge that celebrates the uniqueness of life and its interconnectedness on our beautiful, breathing planet. ©Mara G. Haseltine 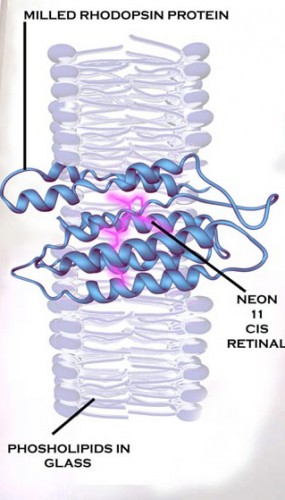 "Lipid Love Starring Rhodopsin As Visual Purple" Lipid Love Starring Rhodopsin As Visual Purple (2004-5) is a large-scale wall installation that depicts the process of how sight is generated in the lipid membrane of the eye retina. A variety of techniques materials and processes are being utilized to create this installation from the ancient art of glass blowing headed by glass maestro Deborah Czeresko along side the creation of the sight enabling protein Rhodopsin whose armature depicted in ribbon diagram form was created by the artist using a special technique she has developed transferring the electromagnetic data for the Rhodopsin Protein into a tangible 3-D form using advanced rapid prototyping techniques, and for a final touch the Cis-11 chromophore will be created in neon. It is also of note that the electromagnetic data used to create the Rhodopsin Protein was the first of its kind to be decoded and is frequently referred to in scientific circles as the founding member, so to speak, of the burgeoning field of bioinformatics. ©Mara G. Haseltine 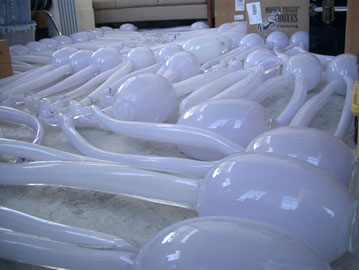 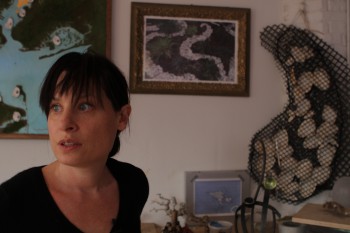 BIO
Mara G. Haseltine is an internationally renowned artist known for her sculptural renditions of microscopic life forms. She was an early pioneer in the translation of bioinformatics into three-dimensional forms. She is an ardent environmentalist and co-founder of The Green Salon, an international think tank devoted to environmental solutions. In 2007, Haseltine created New York City’s first solar-powered oyster reef. She has since devoted her attention to exploring the most efficient and beautiful designs to create oyster and coral reefs. These reefs filter water, create habitats for other organisms, and form reef breaks along coast lines. In 2011, Haseltine was an artist-in-residence at Unviversity College of Dublin in Ireland and Tara Oceans. She was awarded Flag 75 from the Explorer’s Club for her three-year voyage around the world studying the ocean’s relationship to climate change. Her current body of work combines microscopy and reef design of microscopic oceanic life forms. Haseltine frequently collaborates with scientists, technologists and engineers to practice Geotherapy–art which heals the planet. She is an artist-in-residence for Imagine Science Films for the years 2012-2013. Haseltine received her undergraduate degree in Studio Art and Art History from Oberlin College and her master’s degree from the San Francisco Art Institute with a double degree in New Genres and Sculpture. She has exhibited and worked throughout the United States, Canada, Europe, Asia, and at the National Museum of Trinidad and Tobago in the Port of Spain, Trinidad. She has taught at The New School in NYC, and she is a member of both the Sculptors Guild of NYC as well as the Explorer’s Club. She works out of Brooklyn, New York. Her work has been published in The Times, Le Metro, The Guardian, and Architectural Record etc…