“Contemporary technology is ushering in a new era for sculpture, comparable perhaps only to the invention of metal casting during antiquity. In my work I draw cutting-edge approaches from very diverse fields to re-imagine the ancient art of figurative sculpture. My goal is to convey elements of our spiritual essence and open our eyes to the miraculous nature of the underlying nature of reality.

I started out as painter in my youth and later switched to physics. I studied at the universities of Berlin and Edinburgh, and did my graduate research participating in a seminal experiment probing the foundations of quantum physics in one of the world’s leading research groups at the University of Vienna. My science training enables me to take advantage of the latest technologies to achieve my artistic visions. But most importantly, my first-hand experience of the enigmatic nature of reality has provided me with key cultural insights, informing my path ever since. Contrary to our strongly held prejudices about the workings of the universe, there simply is no ‘reality’ out there that is independent of us. Similarly, the divide we perceive between us and the rest of our world turns out to be an illusion: Ultimately, we cannot separate ourselves from each other and the rest of the universe, both in a physical sense as well as when it comes to our actions. These kinds of ideas were well-known for millennia in certain Eastern spiritual traditions but in the West they appeared only relatively recently, at about the same time as non-representational art emerged in the early twentieth century. Quantum physics came as a complete surprise even to its discoverers and it stands in striking contrast to the old (and still absolutely predominant) ‘Newtonian’ paradigm, the mindset of separating subject and object, of detaching ourselves from nature, and of dividing the world into small parts assuming this will lead to an understanding of the whole. Art is holistic in its very essence, both when we create it, as well as when we consume it. And art provides the seeds for our future. Before our future happens, we have dreamt it up. And the central place where we, as a collective mind, dream up our future, is in art. It is therefore critical to harness the transformative powers inherent in art to get to the future we want. I believe a cultural change comparable in depth to the Renaissance is imminent. The urgent need for a paradigm shift is most obvious in our reckless attitude toward our environment; we are jeopardizing our future by rapidly making our planet uninhabitable. Art is a powerful driver of the cultural and spiritual change desperately needed. The lessons of quantum physics offer us a glimpse of a different way of dealing with each other and dealing with our world and I feel it is critical that those embryonic ideas get out into the cultural mainstream. My work is a reminder of our fundamental connectedness, giving tangible expression to the vital paradigm shift from Newtonian separation to a renewed connection with Nature.” 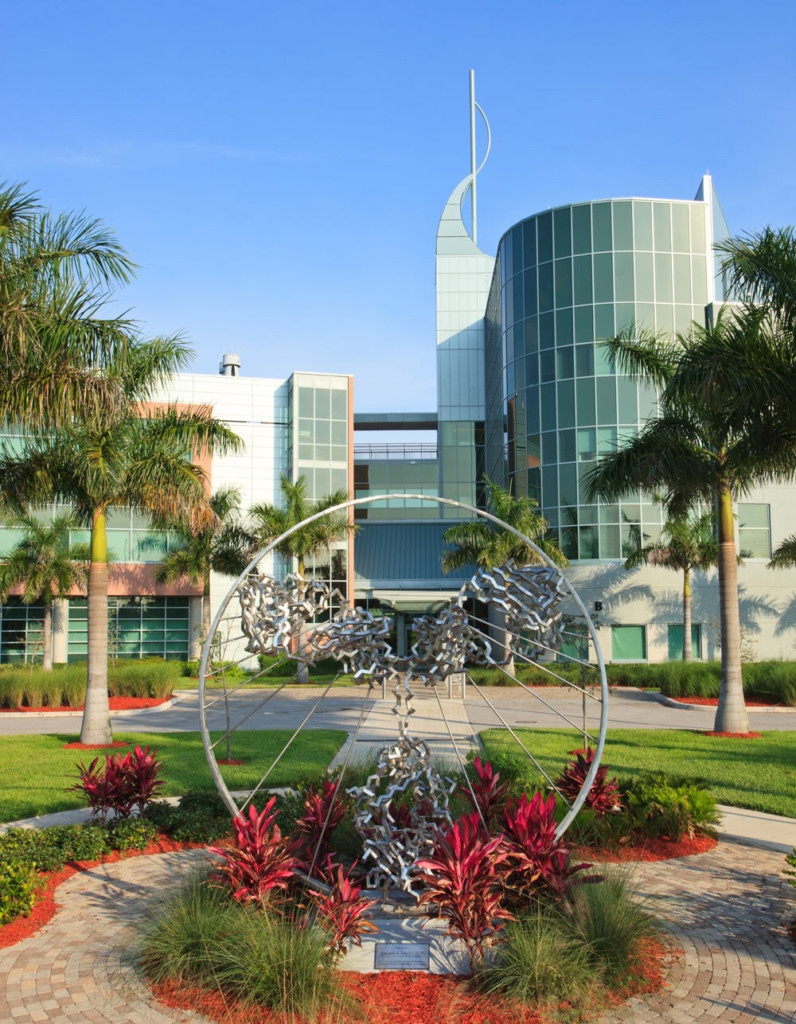 Angel of the West. 2008. Stainless steel. 12’x12’x4’ (3.70m x 3.70m x 1.20m). Location: The Scripps Research Institute, Jupiter (Fla.). "Angel of the West" is inspired by the structure of the human immune system’s key molecule, the antibody. Like tiny guardian angels, legions of antibodies constantly protect us from illness and disease. The sculpture plays on the striking similarity of both proportion and function of the antibody molecule to the human body. A stylized representation of the antibody molecule is surrounded by a ring evocative of Leonardo’s Renaissance icon "Vitruvian Man" (1490). Commissioned as the signature piece for the new Florida campus of the prestigious Scripps Institute, the sculpture symbolizes the application of Western science to the art of healing. ©Julian Voss-Andreae 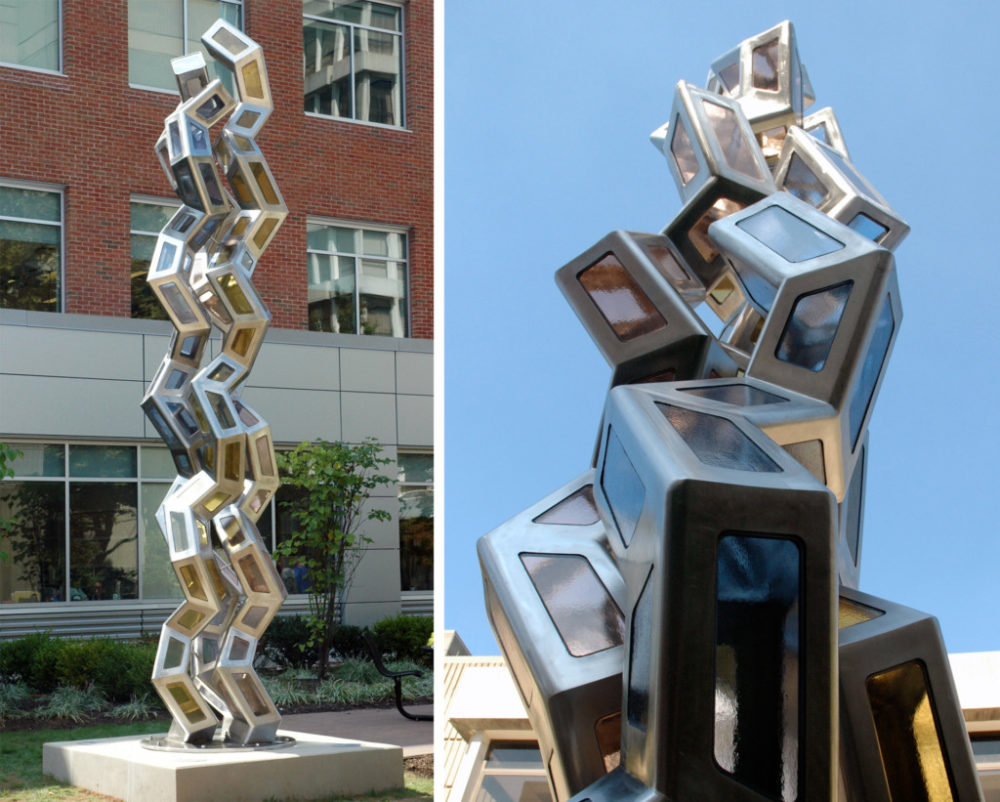 Synergy, 2013. Stainless steel and colored glass 20'x4'x4' (6x1.20x1.20 m). Location: Center for Integrative Proteomics Research, Rutgers University (Piscataway, New Jersey). "Synergy", for Rutgers University’s Center for Integrative Proteomics Research (CIPR), shows off the beauty of proteins and serves as a metaphor for the institute’s multidisciplinary research. Utilizing protein structure data from the Protein Data Bank housed at the CIPR, the sculpture is based on the structure of collagen, the most abundant protein in the human body. ©Julian Voss-Andreae 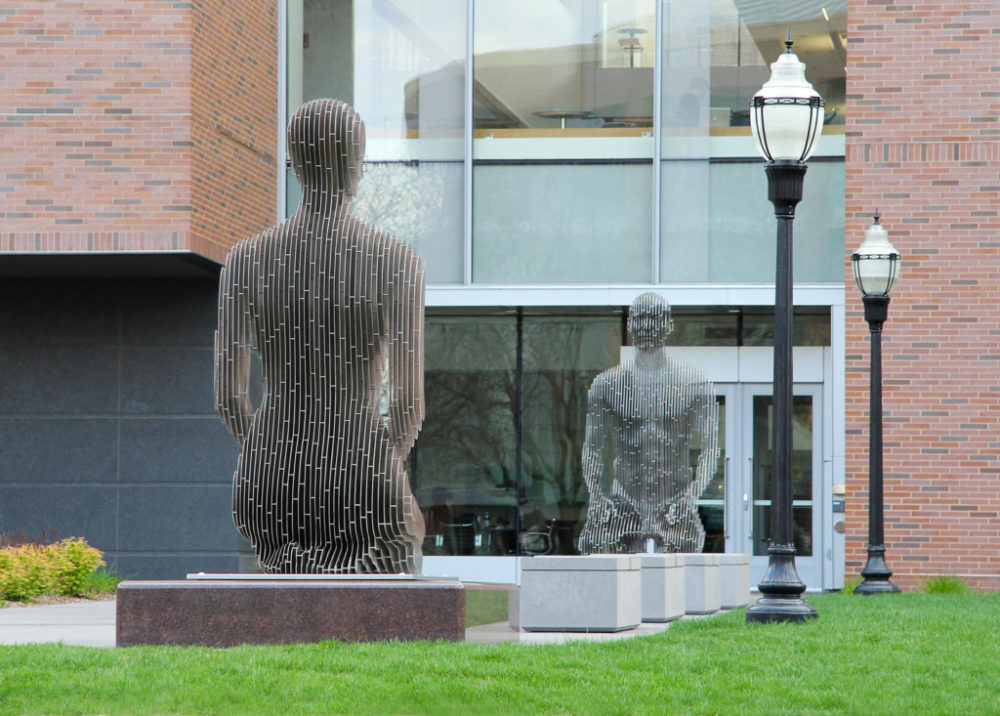 Spannungsfeld. 2014. Stainless steel and granite 12'x70'x6' (4x21x2 m). Location: Physics and Nanotechnology Building, U of Minnesota (Minneapolis, MN). The installation consists of a female and a male kneeling figure, 60' (20 m) apart on a plaza. The figures virtually disappear when the viewer crosses the figures' line of sight, evoking the paradoxical nature of quantum physics. To get a sense of the interactive qualities of the piece, please view this video clip of "Spannungsfeld" (2014). ©Julian Voss-Andreae 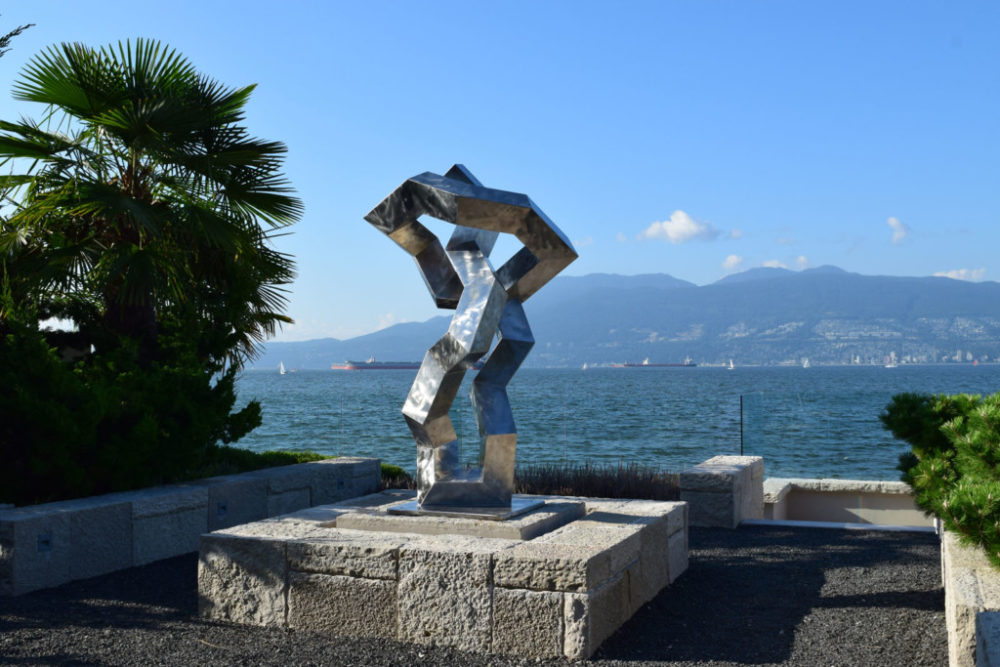 Nanos, 2014. Stainless steel. 87"x56"x37" (220x140x100 cm). Location: Private collection (Vancouver, BC, Canada). Commission for a private residence. Despite its visual similarity to abstract modernist sculpture, this piece is based on the structure of an unusually shaped biomolecule, polypeptide Microcin J25. ©Julian Voss-Andreae 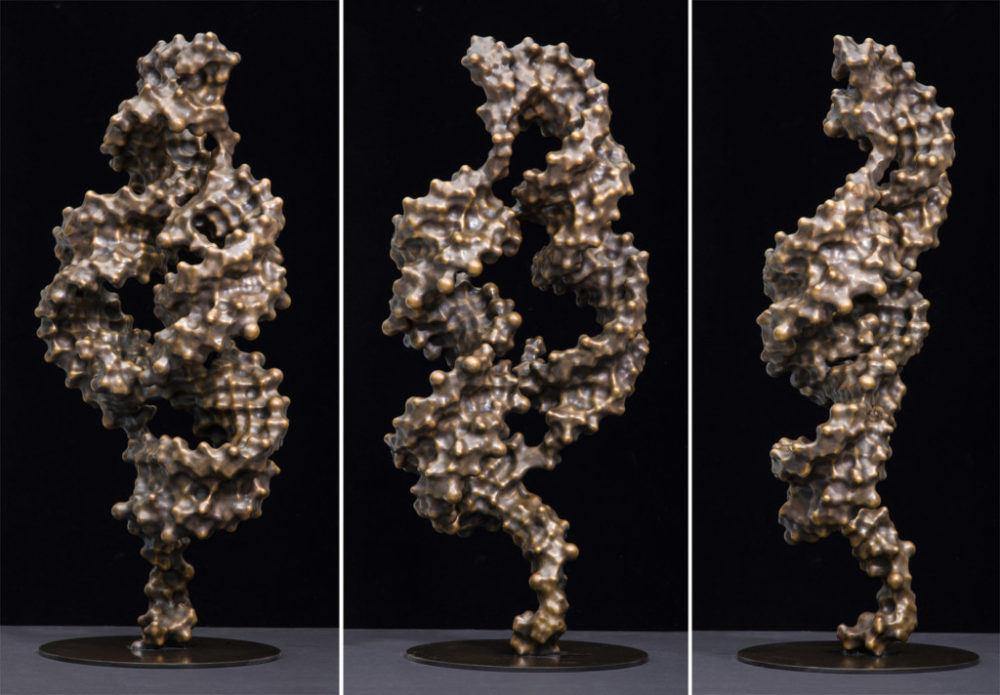 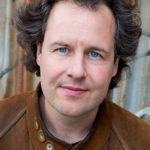 BIO
Julian Voss-Andreae is a German sculptor based in Portland, Oregon. Starting out as a painter he later changed course and studied physics, mathematics, and philosophy at the Universities of Berlin, Edinburgh and Vienna. Voss-Andreae pursued his graduate research in quantum physics, participating in an experiment considered one of the modern milestones of unifying our everyday intuition with the famously bizarre world of quantum physics. He moved to the United States to study Sculpture at the Pacific Northwest College of Art from where he graduated in 2004. Voss-Andreae's work, often inspired by his background in science, has captured the attention of multiple institutions and collectors in the United States and abroad. Recent institutional commissions include large-scale outdoor monuments for Rutgers University, the University of Minnesota, Texas Tech University, and the Georgia Institute of Technology. Voss-Andreae's work has been featured in print and broadcast media worldwide.