John Wynne has a diverse artistic practice which includes socially engaged projects as well as site-specific installations and sculptural works. Although his work often has a strong visual impact, it is always led by his interest in sound. His socially engaged practice is most often collaborative in nature, and he has worked closely with linguists, medical practitioners, anthropologists, acoustic engineers, photographers and film makers. Many of the projects below were collaborations with the late photographer and film maker Tim Wainwright. Tim and John were artists in residence at two world-leading centres for cardiothoracic and abdominal transplants in the UK, Harefield Hospital and the Royal Free Hospital in London, where they recorded, photographed and filmed patients, the devices they were attached to or had implanted in them, and the hospital environment. They also worked with women across Europe with advanced (metastatic) breast cancer. John is currently involved in a multi-disciplinary research project called HPNoSS, Hospital Project on Noise, Sound and Sleep.

Wainwright and Wynne pick their way across a minefield of colossal emotions, hallucinatory experiences and cutting edge medical technology with great tenderness and delicacy.
Clive Bell
(The Wire Magazine)

Through all the differences and similarities of sound and vision, seeing and hearing, looking and listening, a rapprochement emerges in the collaboration. The insistent stillness of a photograph hovers in and out of the temporal movement of spoken language, but both add a powerful sense of human presence and individuality to each other.
David Toop
(Depths and Clamour; inside and outside)

The work is supercharged with affect. Understated rather than sentimental, it evokes a sense of quiet dread, of mortality and frailty; the visceral, bodily sensation of illness, death hovering close by; but also hope, hanging on by the fingernails, the miracles of medical science, of new life.
Michael Gallagher
(Field Recording and the Sounding of Spaces)

In various ways, heart and lung transplants blur the easy distinctions between life and death, between being alive and not. The transplant unit at Harefield is a place where all these issues cross, where dying and living has a different and more elastic meaning than in the world outside.
Charles Darwent
(Art critic, Independent on Sunday)

It is hard not to be moved by the accounts of patients who have had, or are waiting for, kidney, liver, pancreas, heart, and lung transplants. Candid words play against pictures of faces in quiet reflection, while videos, images and sounds seem to accent what it expressed: birdsong, an empty stack of chairs, daffodils, green backs bent over the operating table. Claire Marx, the RCS’s first female President, spoke feelingly at the launch of how proud she felt to have the testimony of patients put centre-stage, within such hallowed walls, for the very first time. She is right to claim that this modest exhibition is “the jewel in the crown” of what the RCS has to show. In proclaiming that what matters most to surgeons is their patients, Marx makes a gesture on behalf of our whole community, one that is important and certainly long overdue.
Gabriel Weston
(The Lancet)

Article about “Transplant”, THE TIMES.

Article about “Transplant”, The GUARDIAN.

Without commotion or comment, Tim Wainwright and John Wynne’s thoughtful installation discloses the experiences of women with metastatic breast cancer. Six video portraits are accompanied by the disembodied voices of their subjects, each recounting their own particular journey ‘through the fog of disease’. The projection of separate sounds and images, and the whisper of noises off, creates a muddled ambiguity that anyone who has struggled to talk about cancer will be familiar with. A sense of suspended animation is created as time is simultaneously compressed and stretched. Quiet, thinking faces create a vacancy into which conjecture about appropriate thoughts and words spills. The artists have crafted this uncertainty very gently but it leaves a lasting impression, making the isolation encountered by people with metastatic cancer tangible to the audience.
Josef James Pitt-Rashid
(The Lancet) 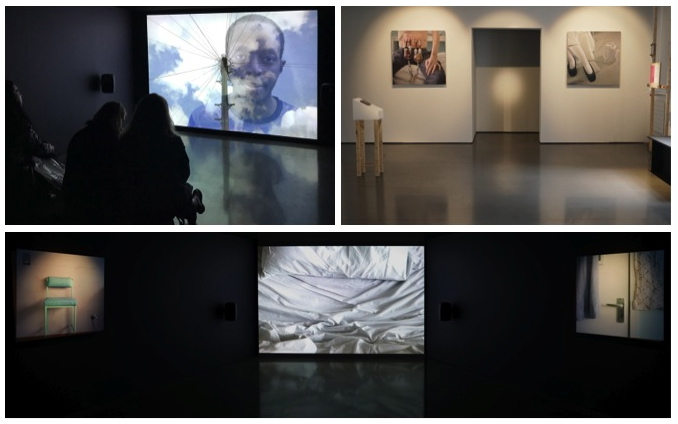 "Birds I wouldn't have heard" (2019). Birds I wouldn’t have heard is a multichannel sound and video installation first shown during the Spare Parts exhibition at Science Gallery London. Made in collaboration with Tim Wainwright, Birds I wouldn't have heard includes a 90-minute video made with materials collected as part of the Transplant and Life project at the Hunterian Museum in 2017. Tim Wainwright died from pancreatic cancer shortly after the artists were commissioned for this exhibition, and John completed the work after discussions with Tim in his final days. The piece conveys the impact of disease and organ transplantation on the daily lives and identity of recipients, live donors, and those on the waiting list. It weaves still and moving images, voice and field recordings to explore the breadth and depth of emotions and experiences encountered while the artists were in-residence at the Royal Free and Harefield Hospitals, both world-leading centres for organ transplants. // © John Wynne

"Transplant and Life" (2016-2017). Transplant and Life was an exhibition at the Hunterian Museum in the Royal College of Surgeons, London. John worked closely with photographer Tim Wainwright to film, photograph and record organ transplant recipients, live donors, people on the waiting list for a transplant, and specialists in the field. They were commissioned to make an artwork that would bring the patient voice into the medical museum, a space normally dominated by specimens, clinical hardware and medical heroes. The exhibition was accompanied by a digital guide designed to enrich the visitor experience via QR codes throughout the exhibition and to provide access to images, sounds and information not on display in the museum. The exhibition consisted of several related installations. In the museum's Crystal Gallery there were 16 high-resolution light boxes and 12 channels of sound, heard via special devices which turned the glass cabinets into sound-producing surfaces. In the Qvist Gallery was a sound and video installation with 4-channel sound and two photographic speaker panels. The work featured all of the abdominal transplant patients and family members with whom the artists worked during their time as artists-in-residence at the Royal Free Hospital in 2016, as well as five of the heart and lung transplant recipients they originally worked with at Harefield Hospital in 2007 and who they revisited in 2016. // © John Wynne 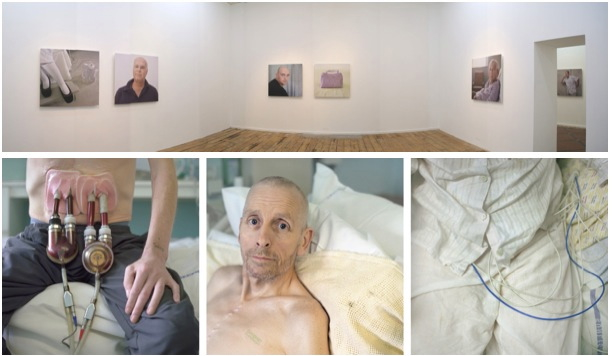 "Transplant" (2016-2017). Transplant was the first collaborative project between John Wynne and the late Tim Wainwright. There were numerous outputs from the project, including a 24-channel gallery installation, a book and DVD, and an award-winning ‘composed documentary’ for BBC radio entitled Hearts, Lungs and Minds. Growing from a one-year artist residency at Harefield hospital, a world-leading centre for heart and lung transplantation, the project explores territory on the borders of art and anthropology, extending the sensory turn in ethnography in the direction of sound and investigating new relationships between sound and still image. Other outputs include ITU, a surround sound video, Flow, a multi-channel sound and video installation at the Old Operating Theatre in London, and Part and Parcel, an 8-channel sound work shown at Kettles Yard and the Whitworth Art Gallery. // © John Wynne 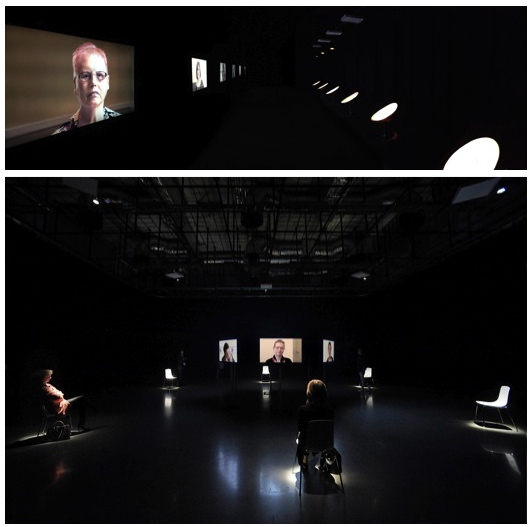 "I Am Not the Cancer" (2013-2015). I Am Not the Cancer is a multi-channel sound and video installation in collaboration with Tim Wainwright based on women from across Europe with advanced (metastatic) breast cancer. Originally commissioned for a one-off event in Brussels to mark the launch of an awareness campaign called The Invisible Woman, the piece was so compelling that patient support groups across Europe commissioned bespoke versions in their own countries. Staged in a darkened environment, the audio for each of the 6 video channels was directed in a narrow beam of audio to a single chair in front of the screen. A subtle very low frequency composition created an immersive, concentrated atmosphere that was felt more than heard. Cancer not only affects the body but also encroaches on one’s sense of identity; the title of the piece came from the Dutch participant Tootje, who said, “I have cancer, but I am not the cancer. I am Tootje." // © John Wynne

I Am Not the Cancer installation from John Wynne on Vimeo. 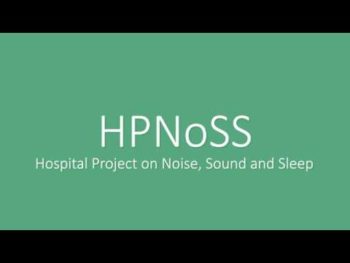 John is the creative lead on HPNoSS, an interdisciplinary research project which seeks to provide a holistic understanding of sound in the hospital environment and the intimate relationship of noise to sleep, rest, treatment and recovery. An article about this project has been published in the British Medical Journal about the project. The video below documents a workshop and symposium held in a teaching ward in September 2017 as part of the first phase of this ongoing project, which was supported by seed funding from the King's Cultural Fund.

HPNoSS (Hospital Project on Noise, Sound and Sleep) 2017 from John Wynne on Vimeo. 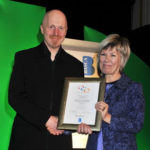 John Wynne. Accepting the award for Sonic Art at the British Composer Awards 2010 from Jude Kelly, Artistic Director of the South Bank Centre in London. The award was for his Installation for 300 speakers, Pianola and vacuum cleaner. The judges described the winning work as "aurally and visually mesmerising, involving a resonant and enigmatic sound world. A highly structured composition with a visual impact." © John Wynne

BIO
John Wynne's award-winning, often research-led work is made for museums, galleries, public spaces and radio: it ranges from large-scale installations to delicate sculptural works and from architectural sound drawings to flying radios and composed documentaries that explore the boundaries between documentary and abstraction. He has worked with speakers of endangered languages in Botswana and British Columbia and with heart and lung transplant patients in the UK. His Installation for 300 speakers, Pianola and vacuum cleaner was the first piece of sound art in the Saatchi Collection in London and won him the British Composer Award for Sonic Art in 2010: Adrian Searle wrote in the Guardian that “Cage would have enjoyed this.” He is a Professor of Sound Art at the University of the Arts London, a core member of the CRiSAP research centre and has a PhD from Goldsmiths College, University of London. Artist website: www.sensitivebrigade.com