My creative practice carries two parallel processes; one of collective analysis that points my attention towards society, culture, religion and science in its exponential evolutionary process, in theoretical and technological terms. Simultaneously a singular, introspective, existential and strongly intimate process happens within myself, a continuous, conscious, subjective observation. Some existential philosophy, Eastern thought and even quantum physics support this scan line and self-observation. Both sides of this bifocality are the building blocks of my reality, of the way I relate to the world and understand existence. As an artist and multimedia producer I design projects that continuously problematize the contemporary individual and collective imaginary. With the use of new media and technology I build theoretical-aesthetic discourses around topics such as: emerging virtual worlds in cyberspace, the avatar and the digital body, artificial intelligence, man-machine integration and all the socio-cultural impact that these have in relationship with the context in which they occur.

uv taste from fito_segrera on Vimeo. 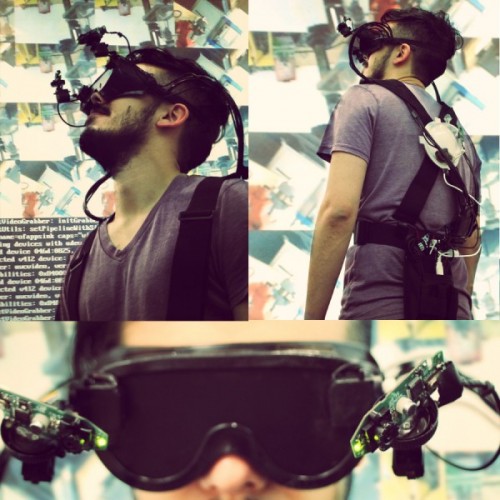 ZOOMORPHIC/2014. Zoomorphism is the process of ascribing to a person, or event the characteristics and descriptions that are animalistic in nature. Global warming, pollution, species extinction, ecological calamity... taken individually these problems are troubling, combined, they constitute an existential crisis that leads to an unsustainable environment: a world as alien to us as the terrain of Mars. Zoomorphic posits such a future world where biology is unsustainable without the aid of technology. Furthermore, ecological balance is only be achieved through the incorporation of non-human entities within a personal bio-dome. The wearer and the enclosed organisms thus form a symbiotic relationship, providing each other with the essentials for surviving our apocalyptic future. ZOOMORPHIC is a critical expression and exploration of sustainability for a future “alien world”. It fuses modular wearable technology, bioart, insects, and physical computing to produce homeostatic systems that interact with both the wearer and environment. The project seeks to call attention to symbiotic relationships between humans and other organisms, sustainability, and the future metamorphoses of technology, ecology, and humanity. The wearable bio-machine augments the visual perception of the user through a permanent dialog established between this, the insects and the machine itself. Wearable computers are programed, using computer vision, to count and track the activity of the flies inside the suit. The dynamics of the population of insects is then translated into variables that determine the position of a system of cameras mounted on servo-motors on the head of the wearer. The result is a mediation of the visual perception of the user; an enhanced vision; an embodiment of the fly itself. ©fito_segrera & Ayodamola Okunseinde 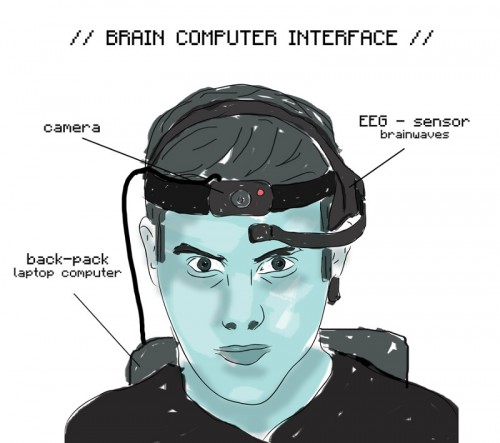 datasphere_1.0 / 2013. We understand the mind as an individual, private and intimate event; a constant conceptual flow located inside our heads. We believe that conscious and unconscious processes of interpretation and relationship between ideas and the outside world build what we call “reality”. However, some nineteenth century thinkers spoke of the mind as a collective phenomenon that happens in a non-local virtual space, a kind of imperceptible sphere in which all psyche and intelligence phenomena, normal and pathological, are born and stored as memory. A vision easy to corroborate through the increasing development of information and communication technologies. ©fito_segrera

Transiconmorphosis is the result of a theoretical refection on the development of new ways of technological communication and their socio-political effects on human beings. Modern communication systems are condemning humans to a life without fundamental elements of body language such as smiles and kisses; pushing towards a cold and multi-mediated personal interaction where natural physical expressions are replaced by digital iconic representations. The piece is an interactive installation and performance that explores human interaction and social conditioning in personal relations and communication dynamics. A conventional chat service, hosted in a computer, is interfaced to a series of electrodes connected to the face of the artist; at the other side of the exhibition space another computer allows a member of the audience to chat with the artist. The system translates the emoji (a visual representation of facial expression) sent by the user in electrical impulses that force the physiognomy of the artist, through a custom electrical muscle stimulation device, to mimic the gesture of each icon.  The artist has no option, his/her facial nerves are being shocked with electrical impulses to contract and relax specific areas of the face; the artist's expression is mediated by technology in ways where free will is not longer a component in social relationships; communication of emotions is hegemonized through contemporary technological communication systems. ©fito_segrera & Emilio Vavarella 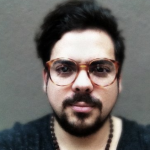 BIO
fito_segrera is a New York based contemporary artist whose work focuses on new technologies and digital media. Since his graduation as a Fine Artist and Technologist in audiovisual and Multimedia production at the Jorge Tadeo Lozano University of Bogotá, his artistic practice has focused on problematizing around topics such as: the origin of virtual worlds and their effect on the understanding of reality, the avatar as an extension of the human body and how it acts upon the construction of identity, man-machine integration/symbiosis, trans-humanism, wearable technology mediated/mixed reality. Currently an international Fulbright Scholar and a candidate for an MFA in Design and Technology at Parsons, The New School, New York. His main exhibitions are: SIGGRAPH 2014, COLLISION 20 and 21 at Boston's Ciberarts Gallery 2014, Huston International Performance Biennale 2014, SXSW Austin TX 2014, EYEBEAM New York 2013, AGORA COLLECTIVE CENTER Berlin 2013, Dorkbot NYC 2013, Harvestworks New York 2013, La residencia Tunja 2012, Web 2.0 Espacios alternativos 2012, Ripping mix, burn, rip 2010, Bogotá Biennale 2009.