Bioalloy is an ongoing research endeavor into artistic cyborgian systems. Bioalloy began with the idea of designing and creating a machine that in’corp’orates a living system that grows and nurtures its own “skin”; a Cyborg (i.e. from the combination of words CYBernetic ORGanism; a term introduced by Manfred Clynes and Nathan Kline)

From initial designs using primitive and simple shapes which depicted non-anthropomorphic Cyborgian forms, the project grew. Further research into the co-existence of a cyborgian system and the human body led to a collaboration with performance artist S. Chandrasekaran, and the Bioalloy and the Body Performance.

Bioalloy has also been fashioned into stunning and durable clothing. Working with contemporary artist Donna Franklin, the once Cyborgian “skin” has now been transformed into Micro’be’ fermented fashion. 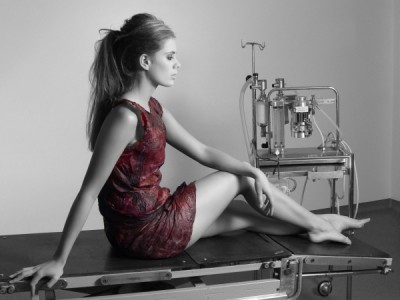 Micro'be' - "Fermented Fashion". Imagine a fabric that grows... a garment that forms itself without a single stitch! The fashion that starts with a bottle of wine. Micro'be' fermented fashion investigates the practical and cultural biosynthesis of clothing - to explore the possible forms and cultural implications of futuristic dress-making and textile technologies. Instead of lifeless weaving machines producing the textile, living microbes will ferment a garment. A fermented garment will not only rupture the meaning of traditional interactions with body and clothing; but also raise questions around the contentious nature of the living materials themselves. This project redefines the production of woven materials. By combining art and science knowledge and with a little inventiveness, the ultimate goal will be to produce a bacterial fermented seamless garment that forms without a single stitch. Donna Franklin & Gary Cass. ©Bioalloy 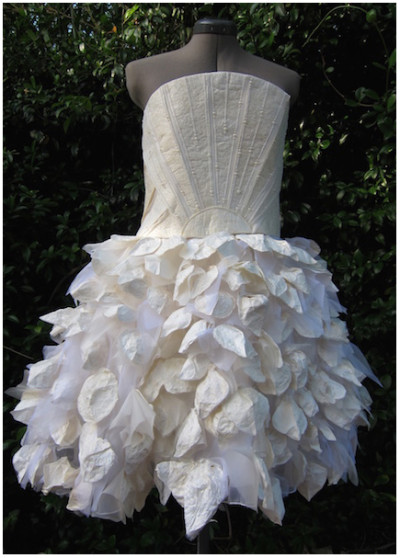 "The Beer Dress". Fashion that starts with a bottle of beer. The Beer Dress is just that, a dress made from the bacterial fermentation of beer. With the advanced evolution of microbial cellulose technology, this new and improved material is very delicate, pure white and inscribed with random biological etchings. The Beer Dress design is the essence of summer, as frothy layers of material tumble down in clouds of white looking cool and chic. Part of lille3000 Textifood exhibition, World EXPO 2015 in Milan. ©Bioalloy 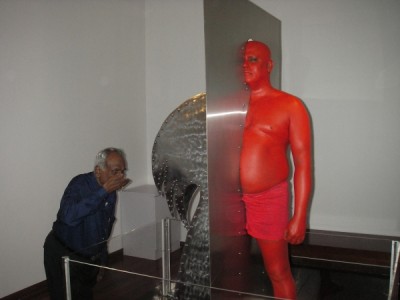 Imagine that you could combine sciences and arts in one creative course! Now you can with the new 'Abiogenesis' programme that aims to combine scientific and artistic endeavours to engage with the theory of how life began on Earth. This programme aims to dispel the old fashioned and boring philosophy that only artists are the creative ones. Why are artists the only ones that are perceived as the creative ones? Why can't scientists be creative? Actually, many believe that both the sciences and arts are equally creative and it is collaborations between these two disciplines that will produce the most extraordinary, and visionary outcomes in the future. This will generate critical thinking, originality and creativity leading to problem solving and informed decision-making that will take us into the future that is fast becoming unpredictable. ©Bioalloy